Stefan Garlicki is gearing up for the first Downhill National Cup Series race at the Helderberg trails on Sunday.

The South African downhill champion said the conditions of the track were right up his alley, but that they did not appeal to everyone.

“You just need to be comfortable riding in extremely loose conditions,” he said. 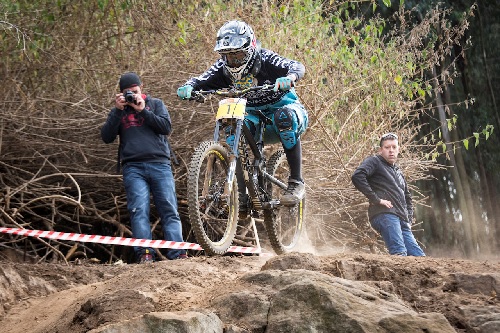 South African National Downhill Champion Stefan Garlicki is excited to get back to the track at the 2017 Downhill National Cup Series race on Sunday. Photo: Supplied

Garlicki also acknowledged the tough competition that he would face.

“I’m not too sure of who all will be taking part, but Johan Potgieter is always going to be quick,” said the Solid Reverse/Investec rider.

Garlicki will ride this weekend for only the second time since September and stressed the importance of taking a break.

“It’s definitely time to get racing again and I’m itching to go. It’s always good after a season to have a nice break – mentally more than anything.

“But after a few months you start getting keen again to hear the beeps.”