Karl Platt and Urs Huber will be teaming up to defend their Cape Epic title when it takes place from March 19 to 26.

The Team Bulls pair are getting on with the sort of training that swept them to victory in 2016.

“We are 100% on course and highly motivated to defend our title,” said Platt. 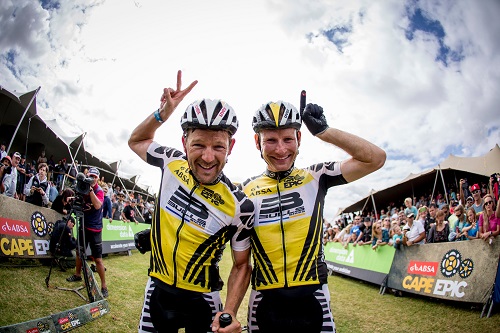 Karl Platt and Urs Huber will be teaming up to defend their Cape Epic title when it takes place from March 19 to 26. Photo: Nick Muzik

“We’ve had no issues so far and are looking forward to the last important prep during January and February.”

Platt and Huber make for an effective partnership. The former has years of experience and has won the race five times, while the latter is exceptionally strong over marathon distances.

They will also have the benefit of an excellent support team in Simon Stiebjahn and Tim Böhme, who have played this role for the past three years.

Besides that experience, Stiebjahn and Böhme have the ability to stay with the front runners – in 2014 they finished third overall after Platt pulled out with a knee injury.

This will be the fifth Cape Epic for Platt and Huber and they are looking forward to riding in some different areas this year.

“It’s interesting having some changes to the route and by the time the race starts we will have done a lot of training in the region of Hermanus,” said Huber.