The Bestmed Tour of Good Hope will have a strong international flavour after five-time Cape Epic champion Karl Platt announced his entry for the event in early March.

Platt, who is already in the country to prepare for a series of events, said they wanted to make an impact in the Cycling SA-sanctioned race, which is presented by the City of Drakenstein and Scicon. 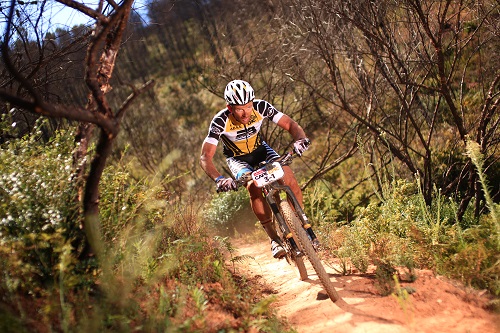 Karl Platt is in South Africa to prepare for the Bestmed Tour of Good Hope and the Cape Epic in March. Photo: Sportograf

Although he did not give much away about their objectives, he said the tour would play an important part in his preparations for the Epic.

“It is a great event with great racing and we will use the strength of the team to our advantage and, for sure, we want to start some fireworks.”

Platt will team up with Huber at the Epic just over a week later, aiming to retain the title and become the first six-time winner.

He and Switzerland’s Christoph Sauser, a multiple former world marathon mountain bike champion, have both won the Epic five times.

“There will be some other strong rivals at the Epic this year, so the duel between Christoph and me is just one of many rivalries,” said Platt.

His objective, he said, would to be competitive while striving to emulate last year’s triumph.

“Needless to say, after last year’s overall victory, this can be the only goal.”

After spending time in South Africa in November, Platt, who came third in the Attakwas at the weekend, has been back for a block of training, which he said would add many benefits to his preparations.

“We will be able to get used to the heat and the special weather conditions. Also, we will be riding awesome trails and last, but not least, enjoy the beauty of South Africa and the great hospitality.”