Brendon Davids‘ cycling career has been a road filled with indecision and tough choices.

The former African mountain bike champion spoke about his transformation into a road rider after winning the Polokwane Annual Mayoral Cycle Race in his first appearance at the event over the weekend.

Davids, who grew up in a cycling-mad family, became involved in mountain biking at an early age after having tried his hand at motocross.

“I was drawn to the dirt but, having said that, I always saw myself making the move to the road somewhere down the line,” said the 23-year-old. 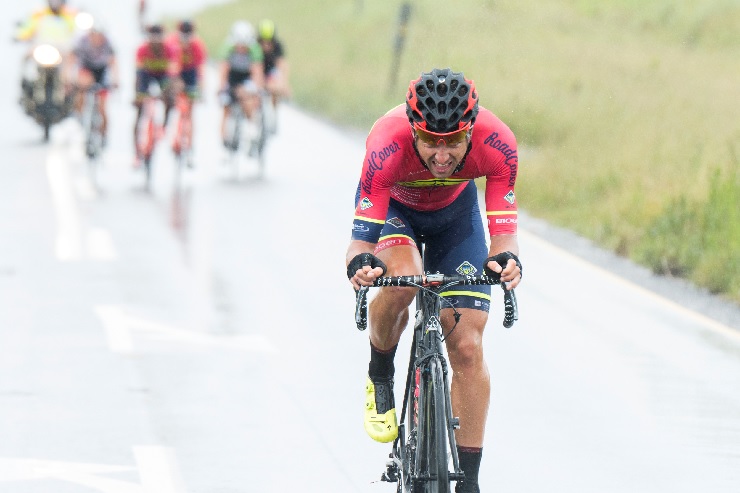 Brendon Davids’ decision to make the switch from mountain biking to road racing is one that had paid dividends. Photo: BOOGS Photography

The Fourways local spent two seasons racing in the United States for Sho-Air/Specialized after leaving school before returning to South Africa.

Having won the junior title at the UCI African Continental Mountain Bike Championships in Stellenbosch in 2011, he added the elite title as an U23 rider in Pietermaritzburg two years later.

In Rwanda in 2015, he won the U23 race again and placed fourth overall.

Davids then channelled his energy into qualifying for the 2016 Rio Olympic Games.

He rode with Kargo Pro MTB for the 2015/2016 season and attempted the Cape Epic, but a fall by his partner, Emil Lindgren, meant he was forced to carry on alone.

“From there I decided to go my own way as I thought that would be my best bet to make the Olympic squad,” said Davids, who was on the shortlist with James Reid, Alan Hatherly and Philip Buys.

“Unfortunately, I didn’t make the selection and that’s when I realised it was the time to change my focus.”

His decision to switch disciplines paid off almost immediately when he notched up an unexpected win at the 947 Cycle Challenge in Johannesburg at the end of last season.

His victory came before the announcement that he had signed for RoadCover. Despite having signed for them, Davids won the race in the colours of Swiss Cycles as his contract only came into effect in 2017.

“As I was still slightly undecided, I knew I had to take the bull by the horns and really make a decision if I ever wanted to make it onto the world stage,” said the 23-year-old.

“That was what motivated me to sign with (team manager) Nic.”

Davids opened his account for his new team when he won stage six of the Mpumalanga Tour, and finished second overall, in January.

The KZN Summer Series, which took place in Pietermaritzburg in March, was next on his list of accomplishments as he topped the podium at both events.

He then made a brief return to the dirt at Hill2Hill in Pietermaritzburg in April, where he showed that he still had the legs for mountain biking as he secured his third consecutive victory.

Unable to completely retire his mountain bike, Davids said he would compete in a few off-road races before lining up for the Knysna Cycle Tour road race in August.

“Through all of this I’ve been fortunate enough to have a few personal sponsors and some really good people who backed and believed in me.

“I’m finally starting to see that things have paid off and I’m in a really good space right now.”