Amy McDougall’s victory in the fourth leg of the National MTB Series provided a valuable mental boost ahead of her time in Europe.

McDougall was selected to represent South Africa at the UCI MTB Marathon World Championships in Singen, Germany, this month before heading to Vallnord and Lenzerheide for the world cup series in July. 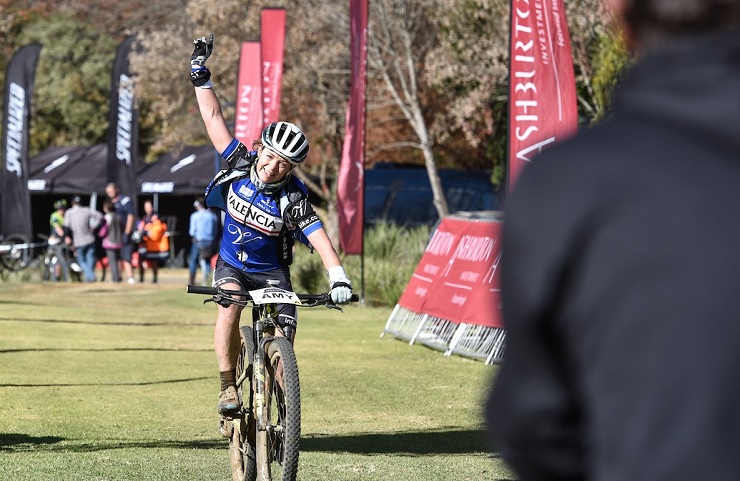 “I’ve had a lot of seconds this year and it started to get a bit demotivating,” said McDougall.

She said her first win at the series had been a major boost for her morale but she would not be putting too much pressure on herself when she headed to Europe.

“I’ve been seeded really badly but I think just to have the experience will be great.

“It will be good to not have too much pressure or too many expectations,” she said, and added that her main goal was to finish.

Selection for the national team was a goal she set herself five years ago, but the Johannesburg local said there had been a number of challenges she’d had to overcome to reach this point.

“When I started I was completely clueless. I started from the bottom and since then I’ve grown a lot,” said the 27-year-old, who has had to contend with various injuries throughout her cycling career.

McDougall took part in her first XCO World Champs at the Cascades MTB Park in Pietermaritzburg four years ago, but failed to complete the course after she fell at the rock garden and suffered a concussion.

In 2014 an injury to her Achilles tendon cut her season short. In April the following year she was hit by a car while cycling, which resulted in a broken pelvis and two broken ribs.

Despite the extensive injuries, McDougall bounced back and won her second singlespeed world champ title later that year.

“I’ve come a long way since my first world champs event at Cascades and now I’m stronger in every way – physically, mentally and technically,” she said.

The Valencia rider said she’d racked up a long list of personal highlights since then, including her two singlespeed world champs titles (2012 in South Africa and 2015 in Japan) as well as her win at the Munga in 2015.

She added that her win this weekend also sat up there with some of her best achievements.

“I think this weekend was quite good mentally for me because it shows it’s definitely worth continuously chipping away and trying to improve.”

McDougall said finances had been the biggest obstacle she’d had to overcome since she first started cycling competitively.

“I haven’t had any sort of financial support from anyone so, as with my riding, I’ve had to work my way up through the ranks.

“Complete Cyclists helped me out with a bike first, and slowly more sponsors started coming on board.

“I’ve worked my way up just by racing as much as possible to get my name out there.”