When South Africa’s Charlene du Preez lined up for her first two UCI Track Cycling World Cup events she knew she was throwing herself in at the deep end.

The Clover rider competed in her first World Cup event in Pruszków, Poland, at the beginning of this month before tackling the second in Manchester, England, one week later.

Du Preez, who left Pretoria to live in England, faced the toughest competition in the world but came out stronger for it. 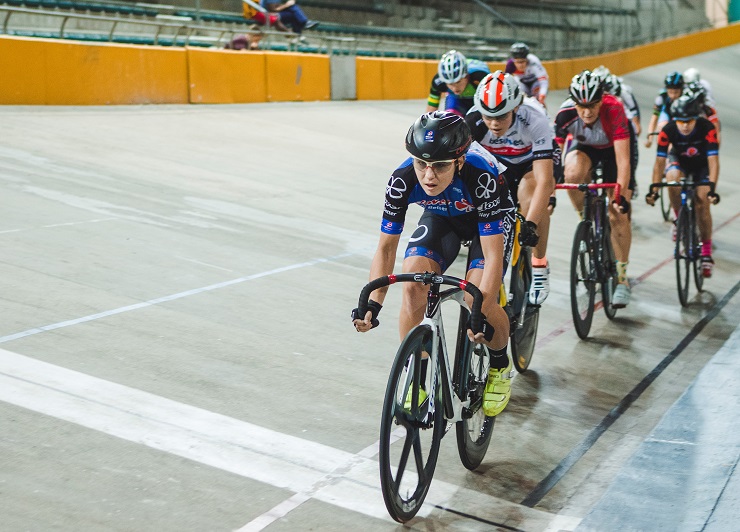 Charlene du Preez is currently competing overseas in the hopes of qualifying for the 2020 Olympics. Photo: Double ST/Cycling South Africa

“I know there’s still a lot of work to be done,” she admitted. “I threw myself in at the deep end, but I did not drown; I came out alive, wiser.”

She competed in the omnium, which consists of 7.5km scratch, 7.5km tempo, elimination and points races.

She felt her results had been some way off where they should have been, but knew her best chance of improving was to continue pushing herself against the world’s best.

The jump from SA racing to European cycling is a testing one, but Du Preez said it was necessary to achieve her ultimate goal of competing in the 2020 Olympic Games.

“The only way to qualify for the Olympics is to race UCI events,” said the national individual pursuit champion.

“Towards the end of next year points will start counting towards the Olympics. By then I have to be competitive enough to get top-10 places.”

Her experience of riding in World Cup events had given her an idea of what to expect, and a clear picture of what she should aim for, she said.

“I learned a lot about gearing for specific races. I dealt with the pressure, lining up with the world’s best riders, but I was okay. I’m not scared to go back.”

Supported by her husband Jaco, Du Preez made the move to England earlier this year; a move she said placed her on the right track.

“Living in the UK makes all of this a lot more achievable. Seeing all the athletes that I look up to and have seen only on TV has been an amazing experience.

“I had a feeling that ‘I’m here now, even if I’m not that great yet, and I know I’m going in the right direction and I know I will get there’.

“It’s been a rollercoaster ride. I’ve definitely achieved more this year than I thought I would, so hopefully it can only get better.”

She made her way to Malaysia over the weekend, where she, along with South Africa’s other Commonwealth hopefuls, will train until December 2.