Charl-Pierre Esterhuyse was taken out his comfort zone on his way to winning the 112km Race2Nowhere in McGregor last Saturday. 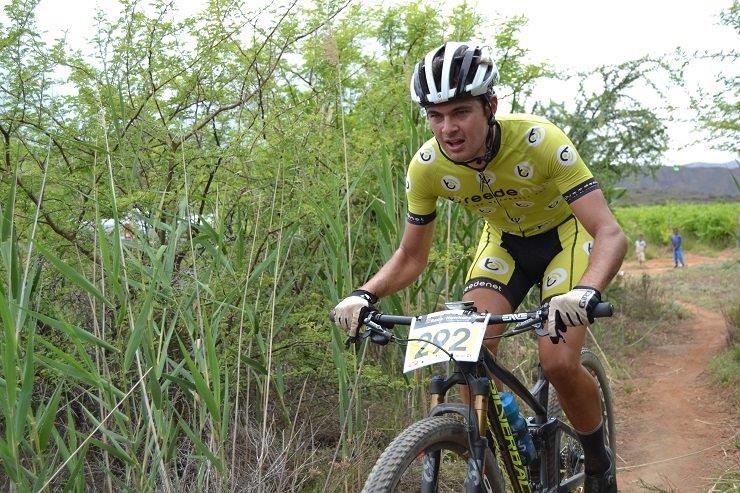 Charl-Pierre Esterhuyse in action at the Race2Nowhere on Saturday. Photo: Supplied

Esterhuyse said afterwards it had been difficult for him to adjust to the one-day race distance.

“I’m more used to races of up to 80km,” said Esterhuyse, who had also won the 55km Cape Duo Challenge alongside Robert Hobson in October.

“I didn’t have many expectations so I played it safe. I didn’t want to break away too early and have guys on my tail all the way. That could have counted against me.”

Esterhuyse, 23, said the race was a close tussle between him, Gerber, Visser for most of the way.

“About 15km in, the three of us broke away and opened quite a big gap between us and the rider in fourth place.” That rider was Andreas Studer, who finished 13 minutes behind Visser.

“We rode well together. We kept exchanging the lead to help each other, especially when there were strong headwinds.”

Esterhuyse, who lives in Worcester, considered breaking away from the other two when there was a climb at 85km, but decided against it.

“I figured it was still too far to go on my own. The wind was blowing and I didn’t know what was coming,” he explained.

He decided to stay with the others until about 5km from the end. “There was one final climb and that’s where I got ahead.”

Esterhuyse’s goal was to gain long-distance experience before the 121km Attakwas Extreme MTB Challenge, which is scheduled for January 20.

The Race2Nowhere also helped prepare him for the Attakwas route, which has a 2 900m ascent.

“There were some big climbs in the first half of the route. We eventually reached about 2 500 metres in elevation.

“I almost crashed on some tricky downhills, but I was impressed with McGregor’s single track,” he added.

Gerber entered the race to help prepare his team, Topeak-Ergon, ahead of the Cape Epic in March 2018.