Eddie van Heerden said he felt “grateful” to have delivered good results for his country at the Sharjah Tour in the United Arab Emirates, which finished on Saturday.

Van Heerden, who represented South Africa at the tour, managed to finish in the overall top 10 and to win the King of the Mountains (KOM) title.

“I’m really happy and grateful for my achievements,” he told In the Bunch today. “I actually surprised myself in the tour. The goal was to get something for the team and I’m really glad I did.” 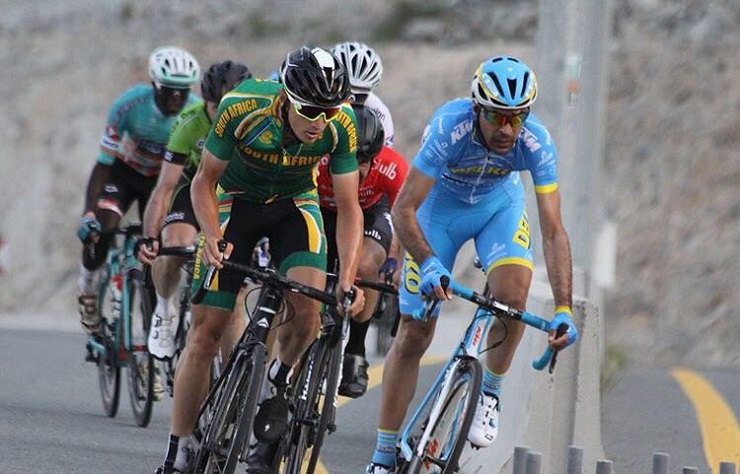 Eddie van Heerden pictured here in the front of a sprint at the Sharjah Tour. Photo: Mathilde L’azou

Van Heerden, who rides locally for Luso AC/DC Dynamics, finished eighth out of a field of 101 international riders.

He could have finished even higher had he not got caught up in a crash on the fourth and final stage, Van Heerden said.

“In the last 30 kilometres [of the stage] there was a crash on the last corner that both Ryan [Harris] and I were involved in.

“I lost about 18 seconds and as a result I dropped from fifth in the third stage to eighth at the end.”

Van Heerden’s KOM title also came with a bit of a sacrifice, he said, as it indirectly may have cost him some time on the general classification.

“I got very excited on the climbs,” Van Heerden said. “The adrenalin kicked in and it was my first tour so I attacked on the first two climbs in stage three with the help of Bradley [Potgieter].

“I went hard, but I then realised I would not be able to keep up the pace. The other riders wheeled me back in and I had to back off.”

On the last climb in the same stage Van Heerden was part of the leading bunch, which had been whittled down to five riders.

“I went for the KOM points again and I did it,” he said. “But just after that I had reached my limit. I could not respond to an attacking move made by the leader [Javier Moreno] in a tunnel.

“The four other guys created a gap from me. In the last few kilometres on the downhill to the finish I tried to close the gap but they held me to 17 seconds.”

Van Heerden thanked his teammates for positioning him well on the third stage for the KOM challenges.

“They worked hard to help give me a good time lapse for positioning myself well on the climbs.”

During each stage they had shown great team effort, Van Heerden added.

“We had a meeting every day the night before and decided upon strategies for the following stage.