Dylan Rebello and Marco Joubert are ready for their second challenge after a hiccup earlier in the year when they tackle the Liberty Winelands Encounter Series, starting near Stellenbosch on Friday.

Riding together for the first time this year, the Imbuko-Momsen pair had their plans disrupted when Joubert broke a collarbone after the Attakwas Extreme MTB Challenge in January.

They only raced again in the Cape Epic last month and will be looking to get back into the swing of things in the three-stage mountain-bike race through the Cape Winelands.

Based in Stellenbosch, the 22-year-old Rebello said they were ready to resume their partnership after working well in the Epic. 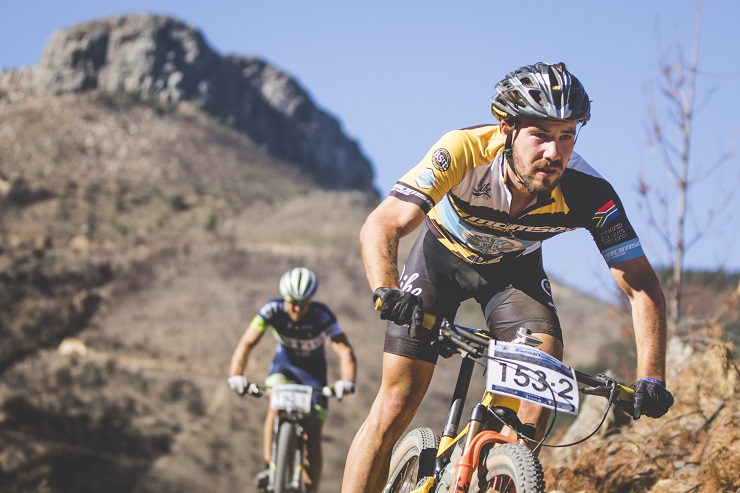 Marco Joubert will be competing in his second race since breaking a collarbone earlier this year when he partners Dylan Rebello in the three-day Liberty Winelands Encounter starting near Stellenbosch on Friday: Photo: Ewald Sadie

“We are quite evenly matched on the climbs, technically and on the flats,” he said.

“In addition, he is one of my good friends so we communicate very well.”

Although the Winelands caters for riders of all levels, Rebello said there would still be some testing sections in all three stages.

“The areas are rocky and technical in places, and even if they are relatively shorter it lends itself to hard racing.

“Marco and I have not really chatted much about it because in mountain-biking you have to be very adaptive.”

Rebello has extensive experience of the Winelands, having ended fourth in 2016 and last year.

In the mixed section, Carmen Buchacher will be looking to hit back after what she said was a disappointing Cape Epic.

“For a number of reasons I was never out of my comfort zone in the Epic and ending sixth after a fifth place last year seems like a step backwards,” she said.

“So I am feeling fairly strong and we will definitely be aiming for top spot on the podium.”