Quick-Step Floors’ Maximilian Schachmann surged to victory in a gruelling battle to the Prato Nevoso summit in stage 18 of the Giro d’Italia today.

The German won the 196km stage in 4:55:52, beating Israel Cycling Academy’s Ruben Plaza and Androni Giocattoli-Sidermec’s Mattia Cattaneo in a three-man sprint over the final 3km of the last 14km climb. 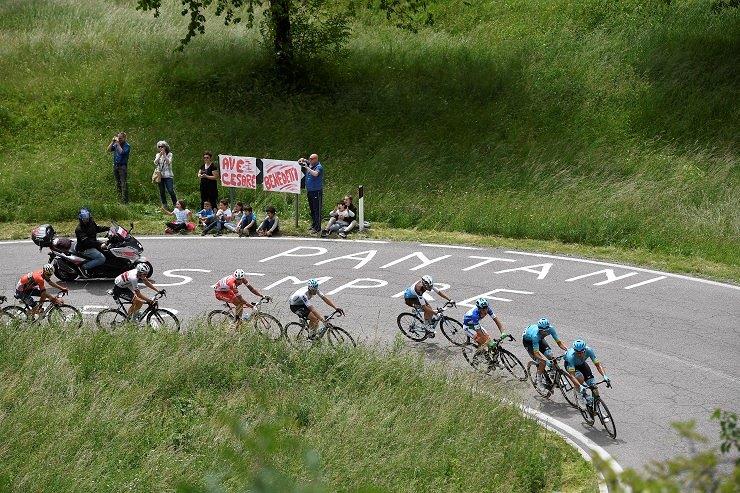 Quick-Step Floors’ Maximilian Schachmann surged to victory in a gruelling battle to the Prato Nevoso summit in stage 18 of the Giro d’Italia. Photo: Fabio Ferrari-LaPresse

The breakaway group extended their lead as the race wore on until it hovered around 13 minutes from the peloton as the final 40km approached.

With 30km to go the lead was a sizeable 15 minutes, the peloton seemingly too far adrift to mount a challenge in the closing kilometres.

Heading towards the final 14km climb, Van Poppel broke away from the leading bunch. The breakaway had increased their lead to over 16 minutes from the peloton at this point.

With 10km remaining Van Poppel got caught as the breakaway took on a gradual 4.8 per cent slope with a steady incline towards the top. By that point the breakaway’s lead had dropped slightly to 15-and-a-half minutes.

Halfway up the climb the lead was down to 13 minutes and 40 seconds, with the leading bunch starting to fragment before Schachmann, Pfingsten, Plaza and Cattaneo went ahead.

Pfingsten dropped back as Schachmann, Plaza and Cattaneo then played a cat and mouse game at the front with less than 3km remaining.

Meanwhile, within the peloton many of the GC contenders launched a series of attacks, among them DiData’s Ben O’Connor, who climbed ferociously.

Up front Schachmann, Plaza and Cattaneo battled it out in a sprint over the last kilometre, launching attack after attack, before the German finally surged ahead to clinch the stage.

Among the GC contenders from within the peloton pink jersey-holder Mitchelton-Scott’s Simon Yates‘s lead was halved as he lost 28 seconds to Team Sunweb’s Tom Dumoulin (Netherlands) in second.

“I feel amazing. It’s great to win a stage in my first Grand Tour. Everybody agrees that it is a really hard Giro, which makes it even nicer to be on top here,” Schachmann said afterwards.

“It’s always nice when somebody wins from our team, it doesn’t matter who. We have a great team and a great team spirit.”

This was Quick-Step Floors’ fifth stage win of the Giro so far.