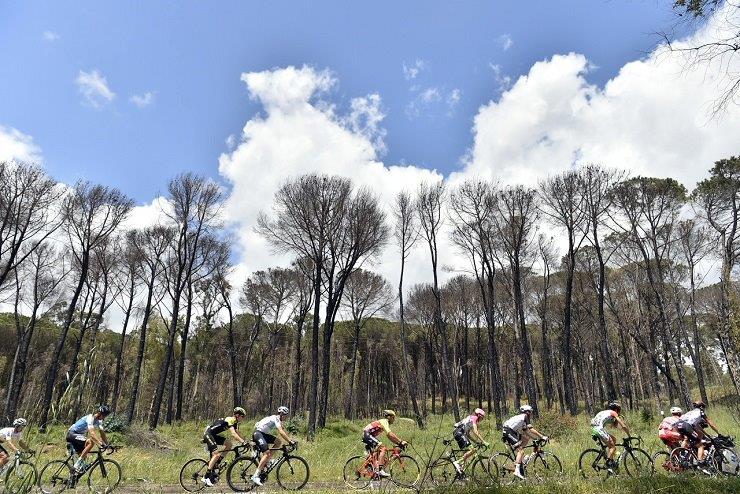 The peloton in action during a previous stage of the Giro d’Italia in Etna. Photo: Fabio Ferrari/LaPresse

The 214km stage kicked off in Susa, and with 34km remaining Nieve, Trek-Segafredo’s Gianluca Brambilla and Bora-Hansgrohe’s Felix Grosschartner shared the lead.

Nieve then attacked which resulted in Grosschartner being dropped. With 29km remaining, the Spanish rider had a good lead.

The gap to the chasing group (Ciccone, Gesink, Woods and Brambilla) grew to one minute and 40 seconds with just under 25km left. The gap to the peloton was 8 minutes and 45 seconds.

With 10km left, Nieve had nine minutes over the peloton and one minute and 40 seconds over the chasers.

Team Sunweb’s Tom Dumoulin executed a surprise attack in the peloton and was brought back before he attacked again. This was followed by an attack from Team Sky’s Chris Froome.

At this point Nieve was four and a half kilometres from the finish with an eight-minute gap.

Nieve went on to cross the finish line first and win his third Giro stage. Gesink followed him home, with Grosschartner third.

“After yesterday’s stage I definitely started to look forward to today,” said the stage winner.

“I think we did a really great Giro d’Italia. We’ve had a really good team right the way through. Romain [Kreuziger] helped me a lot in the breakaway and I’m really happy to get the stage win.”

The final stage will conclude in Rome after 115km tomorrow.