HB Kruger was delighted to win his second race in a row when he was victorious in the Robertson Winery MTB Challenge in the Western Cape yesterday.

“It was quite a good feeling winning again,” Kruger told In the Bunch today. “I was motivated after finishing second in the Amarider [100Miler] and winning the Darling Brew last week.

“I am keen for another hard race,” he added. 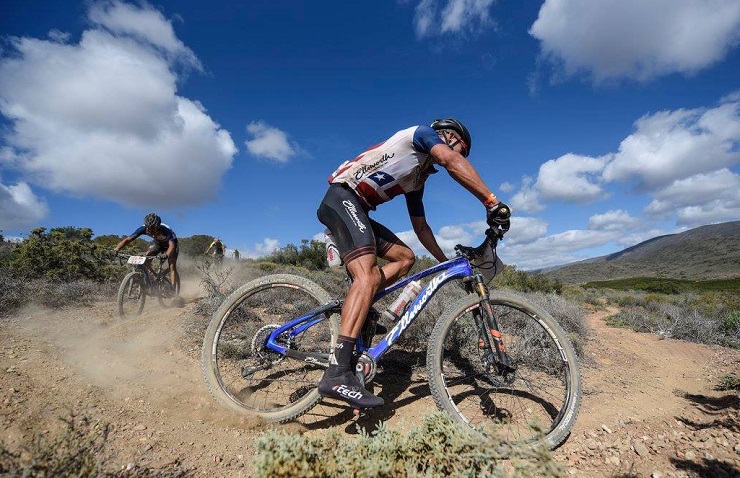 HB Kruger was delighted to win his second race in a row when he was victorious in the Robertson Winery MTB Challenge. Photo: ZC Marketing Consulting

Kruger said the competition in the Robertson race was not the stiffest, but he tried to make it as hard as possible for himself.

“I wanted to get a proper day of racing in. I thoroughly enjoyed it. I had a good day out and the route was awesome.”

He said the race started against a headwind, meaning the riders remained bunched up. “In the first 10 to 15 kilometres we rode against a block headwind, so it was not possible to get away that soon.

“But soon after that we hit a few drags and hills where I went a bit harder. David Garrett was able to come with me on some of the climbs.

“We rode together for about 5km until we hit a rocky single-track section that had a slight ascent.

“I managed to get a gap there and for the rest of the route I rode by myself.

“I just tried to ride at a good tempo, staying safe and trying not to make any mistakes,” he said, as Garrett finished third in 3:29:48.

After having racked up a few wins in the first half of the season, including the TransCape MTB Encounter in February, Kruger feels optimistic ahead of the second half.

“I suffered a slight injury at the Winelands MTB Encounter [in April] and it is definitely getting better now,” he said.

“I was kept out of racing for six weeks and my main reason behind doing all these local events is to give exposure to my sponsors as well as to get good racing in the legs.

“I am using the races as a building block and so far it has been going well. The legs are getting better week after week.”

Kruger will now turn his focus on the Knysna Cycle Tour, before the SA Marathon Champs in mid-July.