Andrew Hill will target a third consecutive title when he lines up for the Scottburgh MTB Race at the KwaZulu-Natal coastal resort town on Sunday.

The Team TIB rider, who became the first male to successfully defend his title at the event last year, said he would have to ride smart and “not take any stupid risks”. But he would also take full advantage of sections where he knew he could be more aggressive. 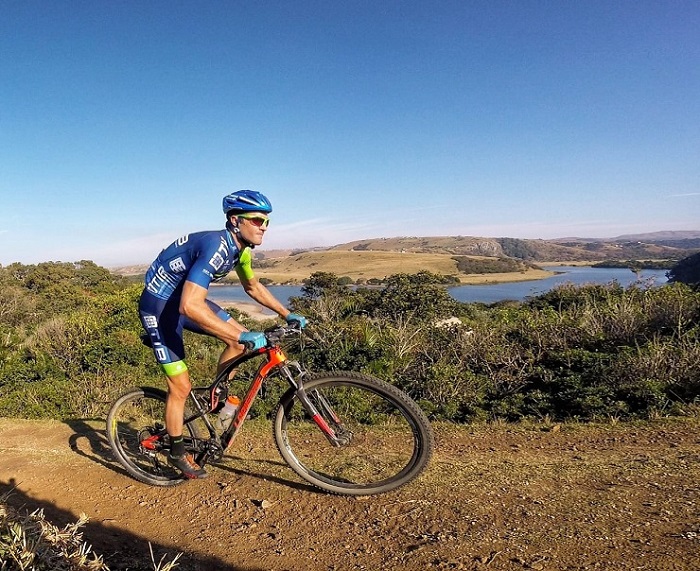 Team TIB’s Andrew Hill is aiming for a hat-trick of titles when he competes in the Scottburgh MTB Race in KwaZulu-Natal on Sunday. Photo: TIBmedia

“It’s an exciting race and always tough due to the technical terrain, elevation gain and the climbing that is nice and steep.

“You’re always going up from the beach into plantations and indigenous forests, so no matter where you go you’re always climbing.”

He would focus on conserving energy where he could, but would capitalise on areas where his strengths lay and try to put the others under pressure.

“There are a couple of really fast climbs that can put pressure on the guys and split the field, then hopefully it’s long enough to gain points where I can get away.”

Hill added that the climbing at the beginning suited him and there was a considerable amount of single-track that was generally fast and smooth, but it was a mixture of everything.

“There are steep and long climbs, descents, technical single-track and you’re riding through rivers.

“At one or two big climbs you have to pace yourself at the bottom, get into the climb and accelerate through to the top but keep going once you get there and not settle back into an easy rhythm.”

Hill said he was a fan of the event. It was always fun and came at a good time of year, especially as it was cold inland and warmer down at the coast.

“It’s nice to race in the area, because there’s not many races along that south coast area from Durban. The only time you ever go there is when you’re finishing sani2c, so Scottburgh brings everyone back down there.

“It allows you to explore some of the trails you do with sani, so it’s one of the biggest reasons to go down there.”

He said he enjoyed the race particularly because of the good organisation, which was headed by “a passionate bunch of mountain bikers”, and that it was always linked to a good cause.

“I’m looking forward to the hospitality, vibe and energy of the race. It’s just something different. Hopefully the weather is good, because often you can jump in the sea and have a swim afterwards.”