Liezel van der Westhuizen and Cindy Jacobsz are preparing for their “most challenging and humbling adventure” – a tandem ride of more than 500km through the Himalayas.

They will be the first South African women to participate in the event, which includes more than 3 500 metres of climbing. It starts in Manali on August 18 and finishes in Khardung La.

Van der Westhuizen, a well-known motivational speaker, will cycle with Jacobsz, who was diagnosed with macular degeneration, an eye disease, when she was 16 years old.

“This will be no ordinary journey because we will have visually impaired riders as well as amputees taking on this adventure,” Van der Westhuizen said this week. 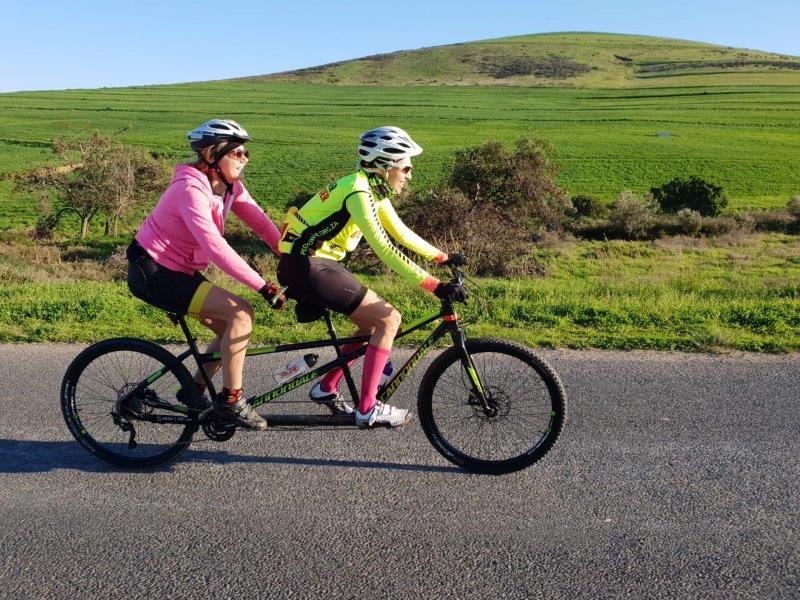 Liezel van der Westhuizen and Cindy Jacobsz will face their “most challenging and humbling adventure” when they take on the Himalayas on a tandem next month. Photo: Supplied

“I’m very excited. August is Women’s Month and it creates opportunities for visually impaired women to participate in any challenge they want to,” Jacobsz told In the Bunch.

Women were sometimes reluctant to pilot a tandem, she said, but Van der Westhuizen would do it and they were “looking forward to take South Africa to India and showing them what our women can do.”

It was Jacobsz who approached Van der Westhuizen with the idea and she agreed. They met for the first time only about two weeks ago when they were also introduced to their tandem bike.

“I was training for a para-triathlon, but became ill and had to withdraw,” Jacobsz explained.

“My daughter read the invitation to me and said I can still cycle. But she could not do it with me, so I went to Liezel.”

Realising that it would be their toughest challenge, they made sure their preparations and training were on point.

“I’m riding on my trainer at home during the week and on weekends Liezel and I take out The Queen, our tandem,” Jacobsz said.

Van der Westhuizen attends spinning classes during the week and has had sessions with a personal trainer to work on her “cycling muscles”. She has also done altitude training.

Jacobsz said: “We’ll have to drink a lot of water – at least six litres a day -m to ensure we don’t dehydrate. I also have only one kidney, so I have to drink more.”

Van der Westhuizen said: “We’ll take it one day at a time and have fun, because it’s not a race.”

They expect the altitude and extreme cold to be their biggest challenges. Jacobsz has never cycled in the snow.

“I’m also not very good in the cold,” said Van der Westhuizen, adding that they had been working with a nutritionist to help them cope with the altitude.

The two have a few sayings to help them motivate each other, such as “ons is amper bo”, “smell the coffee” and “hou, bene, hou!”

“My favourite is ‘ons is amper bo’, even if I can’t see the top of the hill,” said Jacobsz.

Van der Westhuizen admires her partner’s positive energy. “I call her my little ray of sunshine. Her energy is going to keep us going. She’s such a strong athlete that I can just sit in front and do nothing. No, I’m kidding!”

Jacobsz joined in the banter: “You have to do something. You have to steer us in the right direction. I’ll cycle the downhill and straight sections and you can handle the uphills.”

However, they are also serious about the challenge.

“We hope to complete it and bring back the experience to organise similar adventures for visually impaired cyclists,” said Jacobsz. “This is an experience of a lifetime. We must just stay focused. And have lots of fun!”