Bora-Hansgrohe’s Peter Sagan once again showed his class in the sprints when he surged to victory in the 13th stage of the Tour de France in Valence today.

The 169.5km stage had no bearing on the general classification, as Team Sky’s Geraint Thomas retained the race lead over teammate Chris Froome.

Bahrain Merida’s Vincenzo Nibali was forced to withdraw from the Tour and did not start stage 13 after he collided with a spectator during stage 12 and fractured a vertebra. 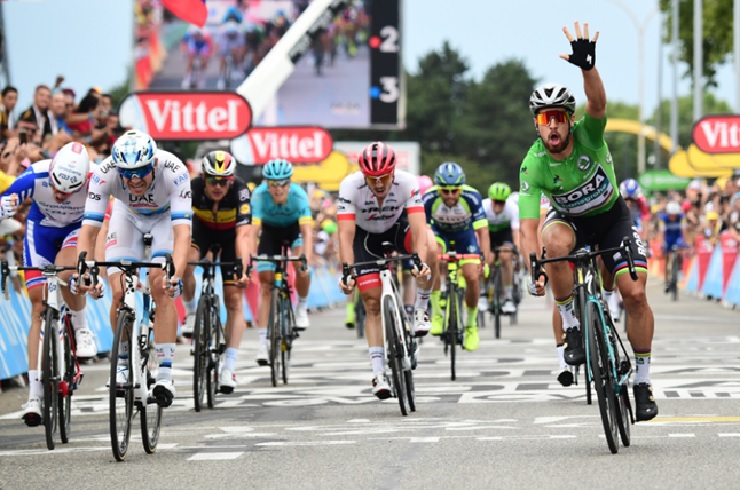 Bora-Hansgrohe’s Peter Sagan once again showed his class in the sprints when he surged to victory in the 13th stage of the Tour de France in Valence today. Photo: ASO/Alex Broadway

In the first 30km of the race Thomas De Gendt, Tom Scully, Michael Schär and Dimitri Claeys broke away and managed to establish a three-minute lead.

Following the Côte de Brié climb, less than 50km into the race, the quartet’s gap dropped to two minutes and 39 seconds.

With a little less than 100km to go, the gap increased to just over two minutes as De Gendt took the sprint points in the intermediate sprint.

The gap increased by a further 12 seconds 17km later when the peloton went through a feeding zone before it dropped to one minute and 45 seconds with 70km left.

The breakaway quartet’s lead remained as Groupama-FDJ set the pace at the head of the peloton. But the gap was reduced again to just over a minute with 65km remaining when the quartet hit the second of the two categorised climbs, the Côte Sainte-Eulalie-en-Royans.

There was no contest for the King of the Mountain atop the climb and as the peloton came over the top, the gap stood at one minute and five seconds.

Tobias Ludvigsson of Groupama–FDJ set a hard and steady pace at the front of the peloton as it strung out and the gap dropped to 40 seconds.

Ludvigsson, Lukas Postlberger of Bora-Hansgrohe and Darwin Atapuma of UAE Team Emirates shared the workload at the front of the peloton for much of the first two thirds of the race.

The lead rotated over the next 20km as Postlberger, Ludviggson, and Atapuma traded places, the quartet retaining a 48-second lead with 30km left.

De Gendt and Claeys dropped away with 25km to go, before Scully got swallowed up 3km later. Schär kicked on and solo-led by 48 seconds with 20km remaining.

Schär’s lead dwindled to 25 seconds with 10km remaining and, following a series of roundabouts, he was caught by the peloton with 5.6km left.

The peloton broke up a little in the final kilometres before Sagan struck relatively late in the last couple of hundred metres to beat Kristoff in a photo-finish sprint. It was the third stage win for Sagan, who retained the green jersey.

“It’s fantastic. It was a flat stage and everyone could recover a bit in the group,” Sagan said afterwards.

“I think everyone was happy in the bunch to have relaxed a bit throughout the stage. I’m very happy to win today. It’s very nice for me and thanks to all my teammates for doing a very good job.

“I thought I’d left it a little bit late. I was a bit behind in the last 600m. Then on the last turn I tried to bring myself up to the front and after that I stayed on Kristoff’s wheel.

“I’m very happy to have beaten him,” he added.

This was Sagan’s third stage win in the Tour, after coming out on top in stages two and five, also flat stages.