Teenager Pieter du Toit of PYGA Euro Steel was overjoyed to win his first race alongside teammate Philip Buys after the pair clinched the overall title in The Magoeba at Ebenezer Dam near Tzaneen yesterday.

Du Toit, 19, and Buys, turning 30 next month, managed to win all three stages in the Magoebaskloof mountains over the weekend with a final general classification time of 8:12:40, beating NAD Pro’s Nico Bell and Wessel Botha by 14 minutes.

“It was very cool to do my first race with Philip and then win it as well,” Du Toit told In the Bunch today.

“We gelled nicely and he was definitely the strong one between us.

“He helped a lot, especially in stages one and two where we were able to get into the breakaways,” he said. They won both stages by about seven minutes. 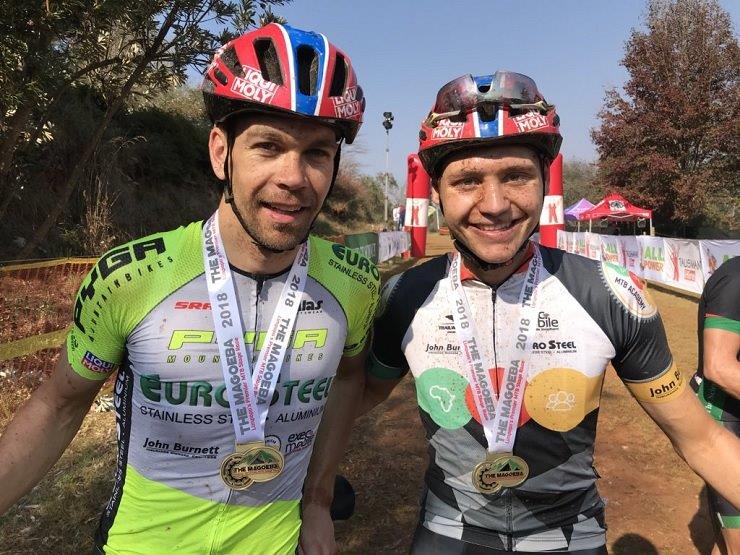 The third and final stage was much closer, however. They beat the NAD Pro pair by a mere second.

Botha in fact completed the race first, but Bell finished behind the PYGA pair, which meant as a team they came second.

“On the third stage Nico and Wessel basically rode together with us as a bunch the whole way through to the finish,” Du Toit said.

“We then had to play quite a tactical game at the end. I had problems with my cleats – they weren’t clipping onto my pedals properly – so I knew I had to be first on the single-track leading to the finish.

“We figured it would be important for me to be closer to the front for the final sprint and it sort of worked out.

“I attacked and then only Wessel passed me, but then Philip and I managed to hold off Nico until the finish line.”

Despite having racked up a clean sweep of victories over the three stages, Du Toit said the climbs were challenging.

“There were some really long climbs in the various stages,” he said. “On day one we had 20-minute climbs, which was quite tough for me.

“On day two we had an hour-long climb. The King of the Mountain [challenges] were quite tough but also fun to chase every day.

“But Philip helped a lot in terms of keeping the right pace.”

Du Toit said he hoped to race with Buys again in the future. “He’s such a great guy to look up to and show me how things are done.

“He’s been in the sport for so long. I will have to work a bit on my fitness, but he has a lot to give and teach me.”

The PYGA Euro Steel team will next focus on the Berg and Bush “Descent” taking place from September 5 to 7, as Buys and Matthys Beukes seek to defend their title.