Frankie du Toit said she was “stoked” to win the women’s category of the SA Enduro Championships which took place at Karkloof Valley in the KZN Midlands over the weekend.

The event was held over 10 stages – five on Saturday and five on Sunday – and riders were timed on the downhill sections and not the uphills. There were also neutral stages in between, which were not timed, but had to be completed within a time-limit.

The riders were timed for each stage on a downhill section and all the courses varied, Du Toit explained.

“We were timed on the downhill sections. We would have a timing tag and tag-in at the top, race down the course and then tag-out at the bottom,” she said. 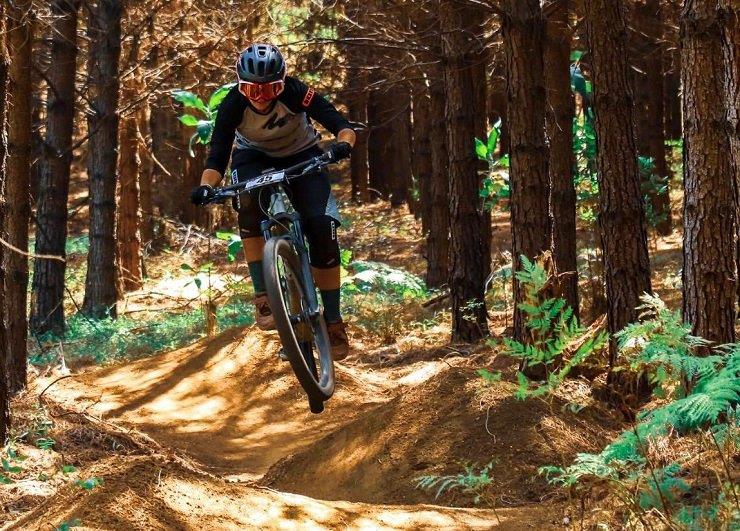 Frankie du Toit (pictured) said she was “stoked” to win the women’s category of the SA Enduro Championships at the weekend. Photo: Alan Richert

Du Toit completed the 10 stages in a final time of 39:37, beating Sabine Thies and Zandri Strydom into second and third place respectively by some six minutes.

A cross-country specialist, Du Toit was clearly delighted with her overall victory.

“I was injured for about six months this year and I’ve only been back on my bike for about three months,” she said.

“The cross-country season was already over [by the time she started again] and I decided to do more enduro racing.

“I grew up here and my parents still stay here so I thought the enduro champs was going to be a really good opportunity.

“I’m really stoked to have won it,” she added.

The event was not live-timed, meaning they were only given their results at the end of each day.

The 21-year-old said, however, she preferred it that way. “You don’t really put pressure on yourself while you’re riding,” Du Toit said.

“Ten stages is a long time so it was important to stay consistent without going too hard on each stage, otherwise you wouldn’t have much left for the rest.

“It was about keeping it consistent with your bike and body so you can get through it all [smoothly].”

Du Toit, a student at the University of Stellenbosch, said the temperature rose to about 38°C at the event but that was not her biggest challenge.

“I was a bit wary about that, but luckily my bike was okay and I actually ended up having a good event.”

Although the women’s field was somewhat diluted, Du Toit said the top three or four riders were competitive.

“Those girls can ride well. They’re all junior, but one of them is an SA downhill champ and the other is a two- or three-time SA series downhill champ.

“They’ve got experience racing in the gravity field, which made me a little nervous. I’m very chuffed that I came out on top.”

Du Toit will now turn her focus to the Maluti Mountain Bike Festival at Afriski in Lesotho later this week.

NEXT ARTICLE | De Groot sidelined due to serious vascular problems