This year’s National Classic Cycle Race features a completely new route and Kim le Court says she is not sure what to expect when she lines up at Carnival City in Brakpan on Sunday.

The Demacon rider, who placed second behind teammate Lynette Burger last year, added that she felt in good form and would, as always, approach the race looking for a win.

“Lynette broke away quite early into the race with the junior boys [last year]. From there it was just a matter of making sure no one got away and that our team kept her up front. 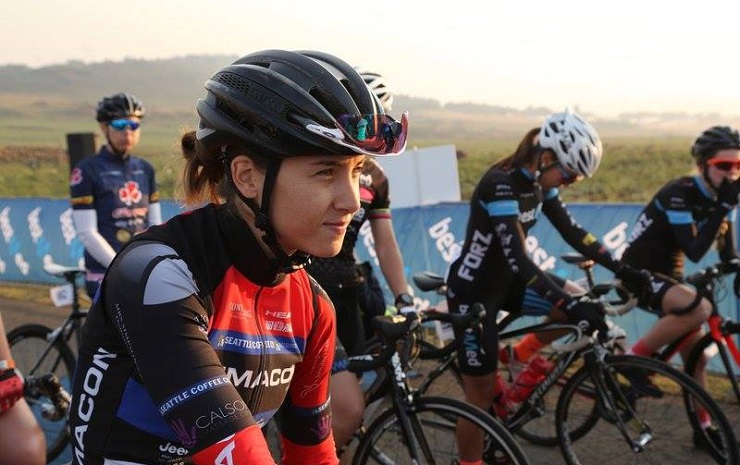 Demacon’s Kim le Court, who placed second behind teammate Lynette Burger last year, will tackle a completely new route when she lines up at the National Classic Cycle Race in Brakpan on Sunday. Photo: Cycle Nation

“I was very thrilled about the overall team results. First and second in a race is always a good feeling.”

Each race was different and the goal would be to work as a team like they always did, she said.

“Everything and anything can happen in a race,” said Le Court. “We haven’t discussed strategies yet as we normally do that the morning of the race, but it will be for the team to try and take the win.”

The 22-year-old said she loved the race as it was well organised and held in a pleasant setting.

“It’s pretty much flatter than quite a few races out there but as the route has changed I’m not too sure how this one will be.”

Le Court said she enjoyed her 2018 season as it included a lot of racing and the team “did such an amazing job” throughout.

“We ride well together and are like a family. It was sad when Lynette [Burger] had her accident and that really damaged the whole team – mentally and physically. I’ve trained so much more on my mountain bike lately so as not to be on the road. I feel safer then.

“I don’t have in mind my goals for next year yet. The only two I can think of now are the African Continental Championships and the Cape Town Cycle Tour.”