Local mountain-bikers Etnard Louw and Matthew Keyser have paired up for their first Cape Pioneer Trek and are keen to make their mark when the seven-day race kicks off in Mossel Bay on Sunday.

“This will be my first Pioneer, a race I’ve always followed closely and which has been on my bucket list since it started,” said the 32-year-old Louw, who rides for Mad Macs.

He and Keyser, 19, from Silverback Bikes will team up for Breedenet. 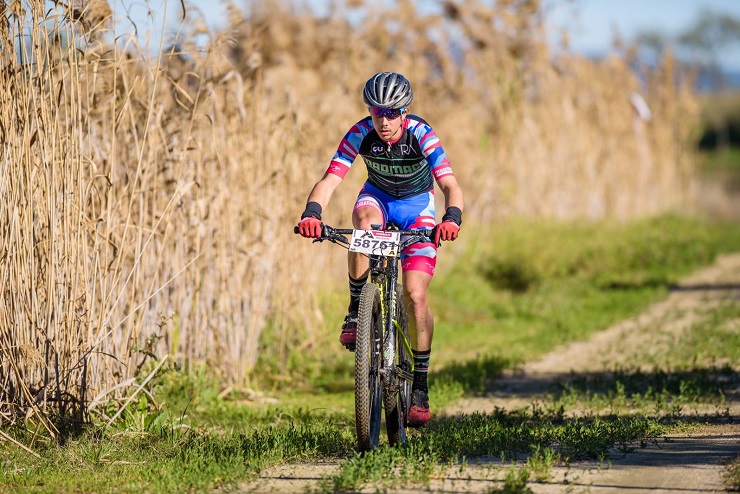 Etnard Louw (pictured) and Matthew Keyser will team up for Breedenet in the seven-day Cape Pioneer Trek mountain-bike race that starts in Mossel Bay on Sunday. Photo: Henk Neuhoff Photography

“They asked me to represent them and wanted to know if I had a preferred teammate,” said Louw.

“At that time I couldn’t find anyone and then Matthew’s name came up and we thought that we’d make a good team.”

He added that Keyser was a strong rider with a lot of explosive power and was good on technical terrain, so he would dictate the pace on the shorter stages and technical sections.

“I’m leaning more towards endurance and setting a steady pace on long stretches and climbs, so we complement each other’s riding style and between the two of us we’ll cover all the bases.”

Louw, who won the Around the Pot Overberg 100 Miler alongside Charles McFall this year, felt the route – which totals over 500km – would suit him well.

“I’m more of an endurance athlete, so the longer stages and races count in my favour. I’ve been focusing on longer climbs so hopefully we can get a good result on stages four and five.”

Louw, who grew up in George, added that he had been training on the roads there and knew most of them.

“That kind of gives you a home-ground advantage of really knowing the trails and district roads well.”

He believed consistency would be key throughout the seven days and said there was no use leaving it all out there on a single stage and ending up playing catch-up for the rest of the week.

“We are aiming for a top 10 and to get the best possible general classification result we will have to gauge our efforts and focus on saving energy for the latter part of the race. We’ll also try to consistently finish strongly and work our way up.”

He also felt that the Union Cycliste Internationale (UCI) status of the event attracted big names and strong competition.

“This year is no different and seems to be the strongest field to date. Racing will be furious, with the top four or five teams battling it out for the win. We will be extremely happy with a top 10 overall.”

Louw, who won the 60km race at the Staalwater MTB Challenge in August, felt he had had a great year thus far and that his form was good.

“I didn’t do as much mountain-bike racing as I wanted to, but the Pioneer will definitely make up for the lack of it. I’ve been focusing and training for multiple-day events and longer climbs.”

He added that this event fitted in well with his season. “I had a big training block leading up to the Tour de Maurice and coming back from that I had great form and tried to maintain it while targeting specific areas in training.

“Pioneer is almost towards the end of my season. I have one or two road races left with the team and then [it’s time] for some rest.”