South African six-time marathon champion Robyn de Groot has experienced mixed emotions since discovering she has to put her cycling career on hold in order to have surgery for a vascular ailment.

The Ascendis Health rider was diagnosed with severe blood-flow problems by specialists in the Netherlands, her team announced yesterday.

As a result of her diagnosis her team would also fold at the end of the year, their statement said. 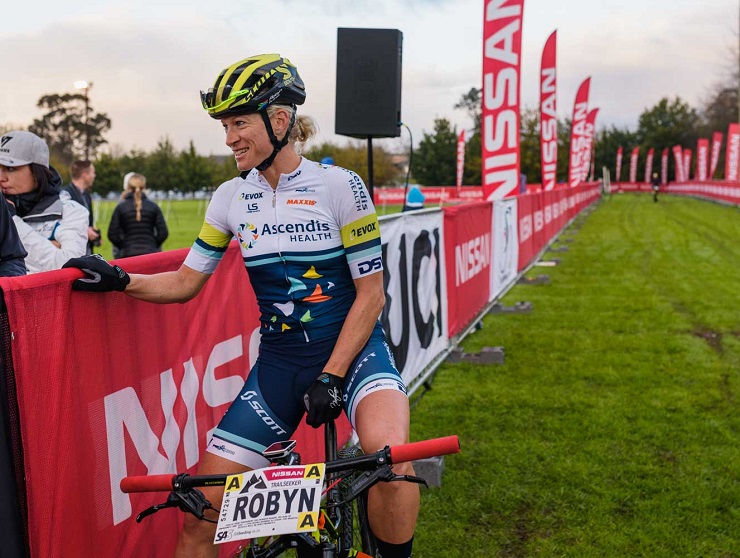 South African six-time marathon champion Robyn de Groot (pictured) has experienced mixed emotions since discovering she has to put her cycling career on hold in order to have surgery for a vascular ailment. Photo: Facebook/@trailseekerseries

She has experienced a burning sensation and loss of power in her left leg which has affected her performances for the past 20 months.

“I’ve had mixed emotions because for the last two years I haven’t had the right diagnosis,” De Groot told In the Bunch today.

“To have the [right] diagnosis and treatment for something where we were really barking up the wrong tree was a relief.

“But then once you start going through the processes of what the options are it can be difficult to digest,” she said, adding that she took her time to weigh up the choices and risks.

She was given two options: stop cycling or have complicated vascular surgery.

The 36-year-old opted for the latter with hopes of rescuing her cycling career.

“It’s been very frustrating to compete for almost two years with this problem – my left not getting enough blood-flow.

“I almost look forward to having a left leg the same as my right again,” she added.

De Groot said she initially went to Europe shortly after winning the SA national marathon champs in July to get a medical assessment.

The doctors picked up a blood-flow problem but were unable to locate where it was. They then referred her to Dutch specialists where she was placed on a waiting list.

The problem was caused by kinking and stenosis (narrowing) of the common iliac and external iliac arteries.

Wishing to still finish the 2018 racing season, and having just competed in the Wines2Whales Chardonnay last weekend, De Groot said it was an arduous process keeping fit while getting all the documentation together.

“I got the quotation while I was racing in the Wines2Whales and there’s no way I will be able to fund my own surgery.

“Now it’s all about getting my medical aid to cover the costs so that I can have it done. That’s the next big challenge.”

With her team discontinuing at the end of the year, De Groot said she hoped to have the surgery done in January.

She then aimed to use the first half of next season to recover and “sell myself” in order to secure new sponsorship.

“I would like to race the second half of next year full gas and hopefully better than I have the last two seasons.”