Tiffany Keep, who won the U23 title at the SA national road champs in Pretoria at the weekend, sees her result as a “bonus” after finishing fourth overall.

She said she was overwhelmed and ecstatic. But this more due to her having just won a sprint finish for fourth overall than because she became the new U23 national champion.

“I was mostly stoked about how I rode. So for me the first prize was to be happy with my race and performance.

“The result just came as a bonus for me and I was happy about that.” 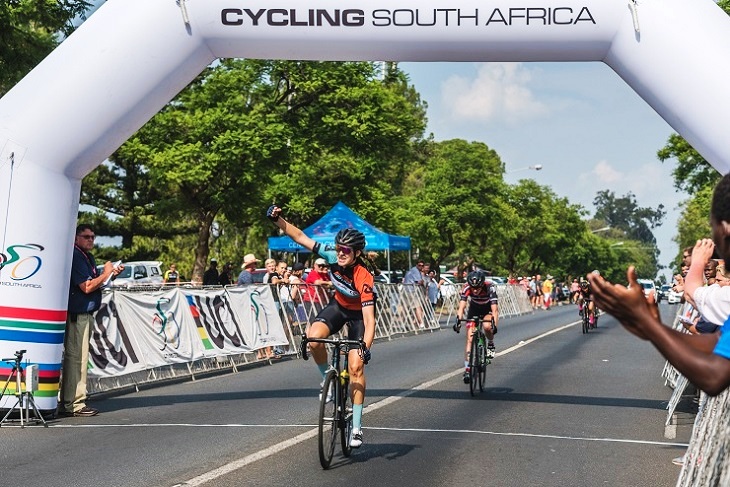 Keep said going into the 136km race she did not place any expectations on herself. Rather, her goal was just to go out and race her hardest.

“I wanted to race smartly and push hard to try and stick with the front group as much as possible and I think I achieved that. I did the best I could, so I was quite stoked about that.”

The 18-year-old said went into the race knowing it was going to be a lot longer than what she was used to.

“At junior level we raced about 80km or 85km, so it’s really quite a big jump up from there.

“The route was also gruelling and I would describe it as being more of a technical circuit compared to some of the other road races I’ve done in SA, which was really nice for me coming from a mountain-biking background. It made it quite interesting.”

Keep said the racing started off at a fairly steady pace and there were not many attacks in the first of the 12 laps. The first real attack came as they started the second lap, going down the start-finish straight.

This was when Juanita Venter, who ultimately placed second behind Ashleigh Moolman Pasio, broke away off the front and stayed away for 100km.

“It was a solo breakaway and she stayed away for pretty much most of the race, which was very impressive.

“The pace began to pick up lap by lap and there were more attacks on the climbs at different stages during each lap. I went with every break that I thought was worthwhile going with.

“There were a few riders who went off the front but most of them were caught again. It was only really on the last three laps where there was a definite change in the way the racing played out.”

Keep added that the attacks were more brutal on the climbs and the second last lap was where the race-winning attack was made by Moolman Pasio, who went off the front of the climb at the Union Buildings.

Joanna van de Winkel and defending champion Carla Oberholzer went with her, but were unable to hold onto her wheel.

“I followed just behind them and overtook. They jumped onto my wheel and two other riders bridged across. We formed a little chasing group and carried on going and rotating.

“Just going onto our final lap before we went up Tom Jenkins we were caught by the remaining riders who were left in the peloton and once we hit the climb the group splintered.”

Keep said everyone climbed at their own pace and she reached the top in fourth position, followed closely by several others.

Van de Winkel attacked, broke free and managed to finish third, around 50 seconds in front of them.

“I was in a group with Carla, Zanri Rossouw, Brittany Petersen and Hayley Preen. Unfortunately Brittany suffered a puncture in the last 3km and the rest of us came round into the finish straight together.

“I opened up a sprint with around 200m or so to go and managed to win that sprint in the group for fourth overall.”

Keep said it was “really cool” to race with Moolman Pasio. “I’ve never raced alongside her, but it was good to see exactly what calibre a World Tour rider is at and get a visual representation of that.

“Overall, the field was quite strong and a lot of big names came out.”

A few days prior to the road race, Keep also won the U23 title in the individual time-trial.

“I wasn’t really going for the win. I was just going to race to the best of my ability and the result was also really just a bonus.

“Placing fourth overall was quite a confidence booster as it gave me an idea of where I could gauge myself amongst the older ladies. It was cool for me to know that if there was a case where I had to go off the front by myself I knew I could probably hold my own for a while.”

Keep said time-trials and road races were two very different disciplines and in the case of the latter it was not always necessarily the stronger rider that won.

“It’s the rider who races smartly and cleverly throughout the whole race. As much as it was a booster for me I had to be realistic with my goals for the road race.”

Keep said her focus would probably shift more towards the mountain biking side over the next few weeks, although there were some road races she would compete in.

“I’m excited about being able to compete in both. I’ll continue to do so until I have to choose one over the other.

“The most influence my national titles will have over my objectives is that I will get to wear a new striped jersey. My goals will remain the same and I’ll continue to race with a level head, be realistic and try to race to the best of my ability.”

She added that her main focus as a first-year U23 rider would be to build strength and gain experience for the years to come in her age category.

“I’m going to be competing against people who are a lot older. Therefore it’s more realistic to focus on gaining experience from racing against them and learning as much as I possibly can, which I can bank up and use for years to come.”