Despite her current good form, Liezel Jordaan said she doesn’t know what sort of challenges await her at the Tour of Good Hope, which takes place in the Cape Winelands next week.

Jordaan was recently crowned the back-to-back national individual time-trial champ and before that she enjoyed victories in the Fast One cycle race and WC champs ITT. 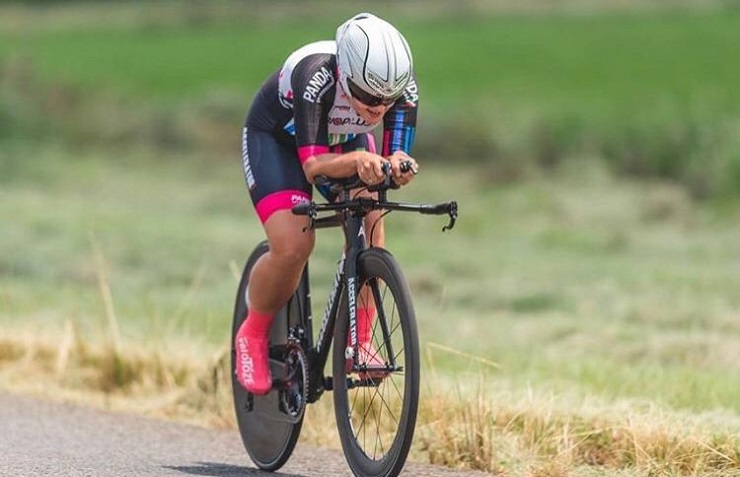 Liezel Jordaan time-trialling her way to victory at the national road champs a few weeks ago. Photo: Henk Neuhoff

She will be tackling a different challenge in the five-day tour, which is likely to include strong team dynamics and could be unpredictable.

“In all honesty I have no idea what to expect,” Jordaan told In the Bunch. “You can have your good days and win and other times you can have bad days and learn.

“So I’m just going into the race without any expectations other than to enjoy it.

“I’ve definitely done more races this year before the tour so it’ll be interesting to see how it goes.”

The 23-year-old, while honoured to have defended her national ITT title against a competitive field, said she had put that behind her and was now focused on new challenges.

“I don’t feel that winning the national ITT title gives me a boost for the tour as that performance is in the past,” Jordaan said.

“I don’t know how my legs will be on the day, especially with two stages before the ITT.

“But I am excited to do my first ITT in the national stripes. It’s just a pity we have so few time-trials in SA.”

The routes in the tour have been substantially shortened this season compared to last year, but Jordaan felt this could suit a more all-round rider.

“Some stages suit me more than others, but it really comes down to the day.

“That is whether the wind will be strong, whether it’ll be a positive or negative race and how I’ll feel on the day.

“But I’m looking forward to something new,” she said, adding that it had been a while since she competed in a tour, which could be testing.

“I’ll overcome it by thinking positive thoughts. A lot has happened between last year and now, with a few new goals and races.

“I’m just aiming for a good overall position and to really learn.”

The Customized-Bioplus rider prioritises the tour as it serves as preparation for her before she joins a Dutch club later in the season.