Fresh off his victories in the elimination and 1 500m races yesterday, Joshua van Wyk is looking to rack up valuable UCI points during the rest of his SA National Track Championships campaign.

The African points and omnium champion said he would now focus on the upcoming races at the Bellville Velodrome in Cape Town to gain as many points as possible.

“Yesterday’s races weren’t too important to me as I’m more looking for UCI points.

“The scratch, points, omnium and individual pursuit are my most important races. If I could win gold in any of those, I’ll be happy.” 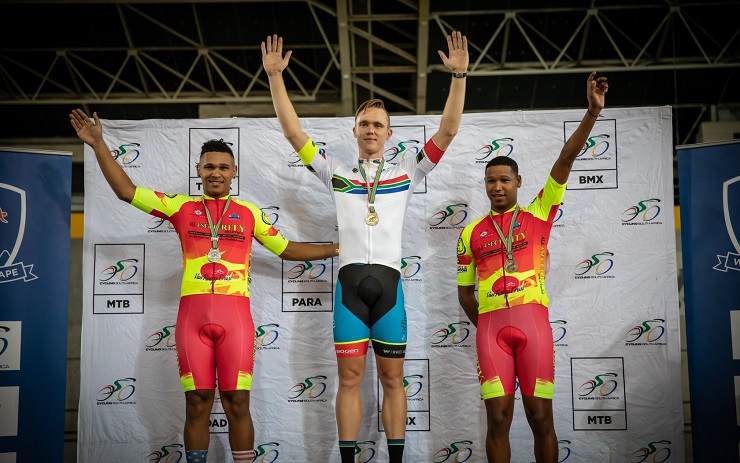 Being outnumbered from a team perspective in the 1 500m, the OfficeGuru rider explained that his strategy was to try and keep the race together.

“With a lap to go I was on the front and I wound up my sprint. No one came past me, so that was a pretty good finish.”

He felt the elimination – where the last rider in each intermediate sprint is eliminated – was a tight affair.

“There were the likes of Nolan [Hoffman], Steven [van Heerden] and David [Maree]. They are very competitive and don’t give anyone space but I managed to take a gap on the last lap, which proved decisive.

“Nolan was behind me and almost went past, but I was able to hold him off.”

Van Wyk, who went winless in last year’s championship, achieved his goal by claiming gold in both races.

“I’d like to win two more gold medals this week, but even more would be great. I’ll see how the days go and how everyone is doing.”

He added that the elimination and scratch races were his favourites.

“I think I’ve always excelled in the scratch because I have a decent engine and a good sprint, so if the race plays my way I tend to do quite well.”

The individual pursuit is however the one that gives him butterflies.

“This one is very important for points and selections and it’s all based on time, so you can’t blame anyone else for a poor performance as it will only be your fault.

“I’m quite nervous for that and I don’t know where my pursuit legs are, so we’ll have to see on Thursday. I need to beat my time from last year, which was 4:45.”

Van Wyk said he enjoyed the event’s new date, which was brought forward from December.

“I feel this time is the best for the champs. It’s a bit strange having it last year in December and now again in March, so it was a bit quick, but I think it worked out.

“I just carried my form through and maybe even improved it a bit. I hope to keep on improving now, stay rested and pull some more gold medals.”