Louis Venter and Anya du Plessis, both under-15 cyclists, were crowned the best-performing riders at the Oudtshoorn Youth Festival last week.

Points were awarded to riders in the road race, criterium and XCM event and at the end of the tournament the boy and girl with the most points were declared the winners.

Thirteen-year-old Venter, who attends Langenhoven Gimnasium in Oudtshoorn, won the road race and team time trial and was second in the criterium and XCM race for his category.

“The road race was very tough and I had to work hard to break away and achieve first position,” Venter said.

“In the team time trial I had very good teammates who worked well together which led to us winning.

“There was strong competition in the criterium but I enjoyed it and made sure to keep my focus at all times.

“The XCM race was one of my highlights because I enjoy mountain-biking, especially technical routes.” 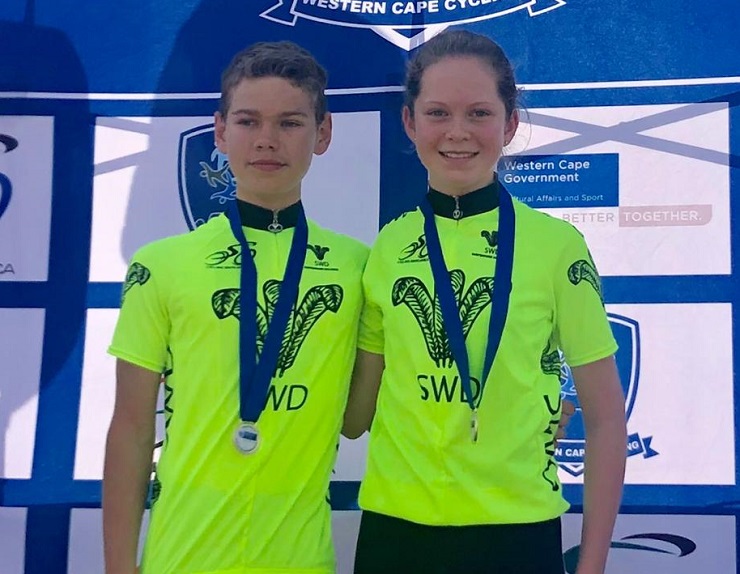 Venter, who won bronze in the U15 road-race at his first SA Youth Road Cycling Championships in Westville on Sunday, said he felt proud to have achieved such good results.

“I feel honoured. My results have motivated me especially to be an example for new and younger riders to train even harder.”

He added that this was only the second year he had participated in the Youth Festival.

“The previous year I had a crash and couldn’t finish the road race. This year my goal was to be safe and enjoy the races.”

Venter will now focus on taking part in as many races as possible and hopes to take his career further and earn national colours.

“I didn’t expect it and I was very surprised with my results,” said the 13-year-old Wilderness local, who added that she did not have much time for training during the past few weeks as she was focusing on exams.

“Each of these races had its own challenges. The road and criterium had stiff competition, while in the team time trial we had to push ourselves so we could catch the group ahead of us.

“The XCM was very challenging and my legs were exhausted after the previous two days of racing.”

Du Plessis, who last competed in the festival two years ago, said her results encouraged her to work harder and focus on preparing herself for the races to come.

“My short-term goals are the upcoming Madibaz XCO and Spur Schools MTB League races as well as the rest of the Eden Marathon series.