South African endurance cyclist Mike Woolnough hoped to finish his sixth Race to Rhodes in under 48 hours, but 32 hours into the 475km mountain-bike race he realised he wasn’t going to achieve that goal.

Even though the 59-year-old was forced to shift his focus after sleep deprivation got the better of him, he still managed to claim his fourth title in the non-stop and self-navigated event that started in Pietermaritzburg and ended in Rhodes last week.

“I had factored in a lack of sleep but hadn’t realised just how tired I was going to be from a quick start and sub-zero overnight temperatures,” said Woolnough, who ultimately finished in two days, eight hours and 54 minutes.

“I got off to a great start, riding much faster than I have ever done over the years. I got through the first handful of checkpoints on schedule. 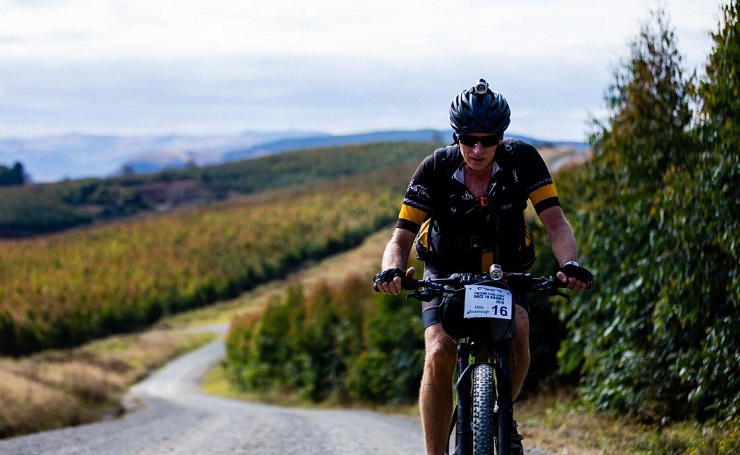 “Eventually, however, the cold weather began to take its toll. The temperature, uncharacteristically low at the start, dropped to well below zero as the sun dipped below the horizon.

“Wading through rivers in those temperatures drained me.”

He had to stop to change his wet socks and layer up his frozen fingers while struggling to unclip his backpack straps.

When he was 108km into the race his shifter cable froze in the outer housing, which reduced him to a single speed in an inconvenient gear.

“Arriving at the 200km support station I placed my bike in front of a fire to thaw it out. Later that night it froze again and this time I was able to urinate on the cable housing to free it up.

“Another pre-dawn river crossing had my legs cramping from the cold. When the sun came up I was able to move more easily but I had already fallen behind schedule.”

By this time tiredness was setting in and he decided to sleep when he could no longer keep his eyes open, where and whenever that might be.

“This happened while riding along a mountain ridge up against the Lesotho border between the tiny village of Black Fountain and the Tinana Mission at 9pm.

“I lay on my back under a sky sprinkled with myriad stars and lit with the silver glow of a full moon.”

After a five-minute nap he was up and on his way again. Although extremely tired for the rest of the race the navigational challenges kept him focused and he pushed back the desire to close his eyes.

“From then on I took my foot off the gas and instead of solely focusing on moving forward I had time to interact with people I came across,” said Woolnough, who survived on just seven minutes of sleep to win the Race to Cradock in March.

“There is always a wave and a smile as you pass them and whenever you stop they ask where you’ve come from and where you’re going.

“The underlying truth is that although we might have started our race in Pietermaritzburg or that we live in a city far afield, we come from a world far removed from their day-to-day reality.”

He said it was impossible not to be touched by their daily challenges as he pedalled his bike through the places they call home.

“Towards the end I took a one-hour time-out to enjoy a coffee and toasted sandwich at a lodge at the top of the mountain before riding down to the finish.

“This was something I haven’t allowed myself to do previously when racing hard.”

He added that he felt the freshest he had ever at the finish and although he had not achieved his initial goal he rolled over the line with a deep sense of satisfaction and appreciation of what he had seen and done over the preceding days.

“When I rode my first Freedom race in 2007 it transformed me as a cyclist and a person.

“In the intervening years I’ve been drawn back to these races because while you ride your layers are peeled back as you discover more about yourself and this country of ours.”