UCI Hour record holder Victor Campenaerts will do all in his power to defend his time-trial title at the Belgian Road Championships in Middelkerke on Thursday.

The 27-year-old Lotto-Soudal rider, who was second overall in this year’s Tour of Belgium, is fully aware of the other strong contenders eager to wrest the title from him.

“Wout van Aert might be my biggest competitor if you look at his performances in the Critérium du Dauphiné,” said Campenaerts. The 24-year-old Jumbo-Visma rider won the green jersey, the stage-four individual time-trial and the 201km fifth stage in that event. 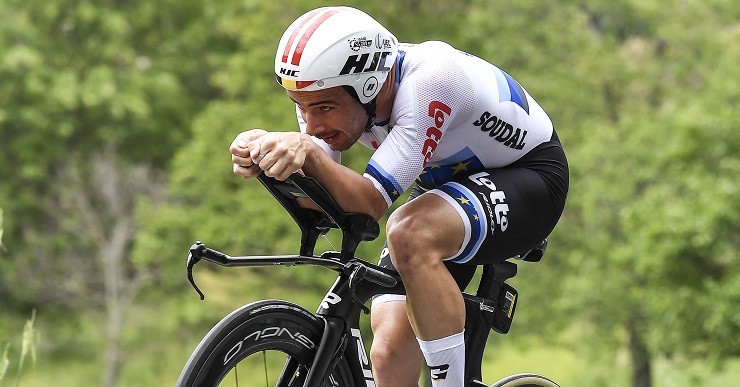 Victor Campenaerts aims to defend his time-trial title at the Belgian Road Championships in Middelkerke on Thursday. Photo: Fabio Ferrari/LaPresse

Campenaerts added that Deceuninck-Quick-Step’s Remco Evenepoel, who won the Tour of Belgium, was also in “great shape”.

“Besides those two, our team also have riders who are able to beat me in the time-trial.

“Thomas De Gendt set great times at the Giro in the TT and Tim Wellens won the TT in the Belgium Tour.”

Campenaerts, who won the TT at last year’s UEC European Road Championships, said he fully intended to defend his title.

“If I am beaten by someone from our team I will be disappointed, but I prefer being beaten by a teammate than by another rider.

“I hope the jersey stays in our team. However, I would be disappointed if it doesn’t end up on my shoulders.”

He was the man to beat, which put pressure on him.

“But if I can break the world Hour record before the eyes of 650 000 Flemish people I think you can say I perform well under pressure.

“If I don’t win the Belgian time-trial championship I will be disappointed.”

Campenaerts said he had had a tough schedule in recent months, having competed in the Tirreno-Adriatico, Giro d’Italia and Tour of Belgium.

“Therefore I do not have to train that much anymore.

“Of course I’ll still be having some hard training days because I am someone who likes to be fully prepared for the day of truth.”