Newly-crowned U19 national road and time-trial champion Tiano Da Silva is aiming for a successful stint on the track in Europe.

The 18-year-old, who claimed double gold at last weekend’s youth road championships in Westville, is heading to the UCI World Cycling Centre in Switzerland on July 7 to prepare for the following month’s Junior World Track Champs in Germany.

“I feel like my titles are going to help me stand out in Europe and it will have a great impact on my CV going forward.

“Wearing the jersey leaves one with a sense of pride and pushes you to strive that much harder,” said Da Silva. 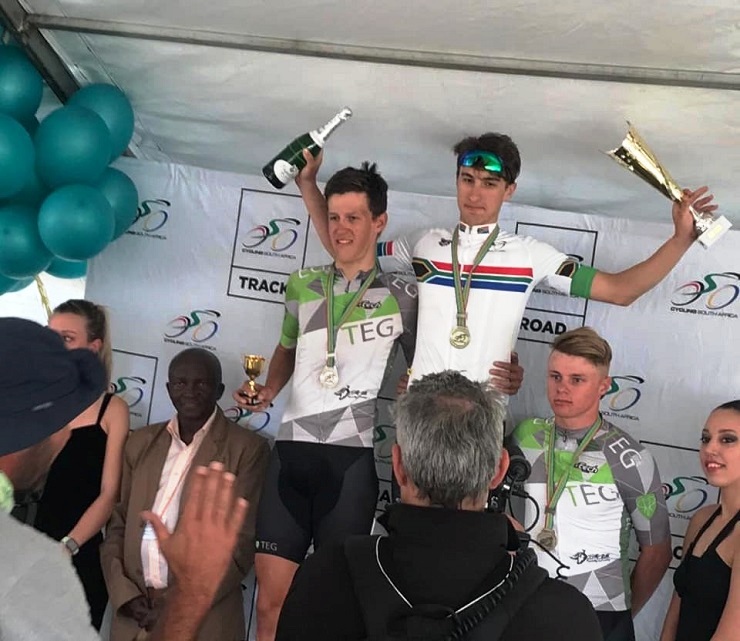 It was also a constant reminder that he was able to achieve what he set out to do.

“I’m hoping for a top result at the world champs while representing my country.

“This will also help towards my long-term goal of racing on the world tour scene as well as becoming a well-established track rider.”

Da Silva, who won the scratch and points races at this year’s African Continental Track Champs, said having secured both titles was something he was still trying to take in.

“I had always backed my time-trial abilities to pull something off, but I knew it was going to take something special to get the road title.

“Emotions crossing the finish line were high. I had pushed myself to the limit and to cross that line by myself was just pure joy.”

The ProTouch rider added that he was also relieved as he and his coach Mark van der Merwe had earmarked this race as long ago as December.

“I was able to play it cool as my teammate was controlling the breakaway. Unfortunately [for him] he was caught with one lap to go.

“About 500m after we had completed the sixth of seven laps I was sitting on the front for some time. As I was about to swing off I looked behind and noticed the smallest of gaps. I decided to put in some acceleration to see what would happen.”

He said to his surprise a gap opened up. He decided it was now or never and fully committed to the move.

From there on it was head down and ride in time-trial mode to the end.

“For the time-trial it was important to keep calm.

“The original distance was brought down from 35km to 23km.

“Although it was much shorter it was still important to hold back at the start, slowly build up and empty the tank towards the end, which I felt I managed to accomplish.”

The Cape Town Cycle Tour junior champion said he always seemed to perform well at nationals. He was second in the road race last year, a result with which he was extremely happy.

“I feel I have the mindset and focus that is needed to perform at this high-status race.”