South African Joanna van de Winkel is gaining valuable international experience, along with the rest of the national women’s team, ahead of this month’s UCI Road World Championships in Yorkshire, Britain.

Van de Winkel competed in the three-day Giro della Toscana in Italy at the weekend alongside Carla Oberholzer, Maroesjka Matthee and Tiffany Keep and was the highest placed SA rider, finishing 28th.

“It was a good first step for us as an SA team to see where we stand and what we need to work on in terms of international racing.

“We don’t get the practice in SA for big bunches and fast and technical racing.”

Van de Winkel, 37, said the last time she raced Toscana, in 2012, she placed eighth overall. But then she had been racing the whole year in Europe and knew how to position herself better in the bunch.

“For me the first time back in the EU bunch was a bit stressful. There were a lot of crashes and possibly due to not all the big teams being there, there was a frantic frenzy before each climb to get to the front as there wasn’t always place to pass on the narrow switchback climbs. 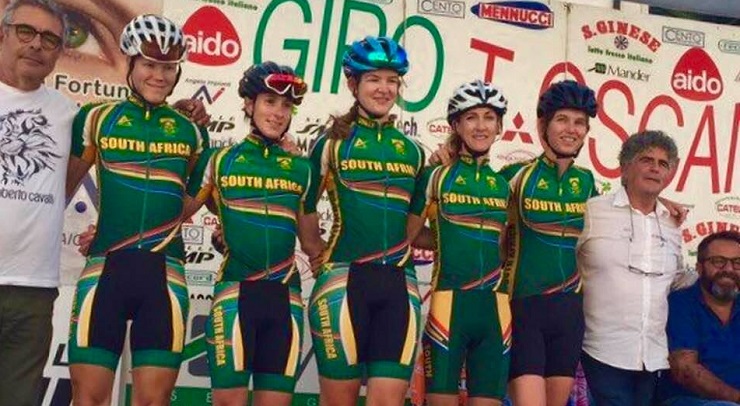 “Then on the start of the climbs there were several crashes as people tried to squeeze past the slower riders.

“The feeding from the side was also a bit stressful. We also don’t get to practise this in SA so I was often caught out at the back while trying to slow down for a bottle instead of focusing on the race.”

She added that these things became more of a habit and required less focus once one had done them often enough.

“This is why these trips are so important for SA riders.”

Van de Winkel said they had some challenges even before they started the race. The other teams had seven riders and although they started off with that number, there had been several injuries shortly before the tour.

“We needed five riders to start and we only had four. Luckily ex-SA rider Arien Coppock, who works in cycling tourism in Italy, came to the rescue and started the prologue with us so we could start.

“We were also lucky that Kevin Campbell, who runs the U23 Dimension Data team in Luca, helped us as DS [directeur sportif].”

Their main aim for this specific tour was to learn as much as they could and treat each day as a race in itself. Van de Winkel said they did not put too much pressure on themselves but rather went into it to have fun, learning along the way.

“Obviously we all wanted to do the best we could with the aim of gaining as much experience as we could before worlds.”

The team are now staying in the Ardeche region of France and will start the six-day UCI 2.1 Ardeche Tour on Friday.

“Most of the top teams and riders are racing and everyone is at their peak before world champs and having raced a full season at this level so we expect it to be very hard.

“It also contains lots of climbing, with days of over 3 000m of ascent with 130km average distance on the stages. There are 27 teams and also narrow twisty roads, so the bunch will be big.

“We hope to learn and gain as much experience as we can from this tour as well, before worlds.”

Van de Winkel said they again had challenges because they were down to three riders due to Oberholzer suffering a crash in the feed-zone on the first day of the Italian race and breaking her collarbone.

“We needed four to start, and although they called on reserves shortly after Zanri Rossouw‘s crash at Africa Games, riders turned down the offer due to unavailability and cost.

“Luckily there has been a lot of positive support and people willing to help, so we’ve managed to find a fourth rider from SA.”

After Ardeche, Keep will travel to meet up with Ashleigh Moolman Pasio in the UK for the world champs time-trial on the 24th.

“Maroesjka and I will probably stay a few extra days in Belgium before travelling to the UK to join the team for the road race on the 28th,” said Van de Winkel.