“That was brutal, I suffered bad today, Michael was next level and really gave me a push, a couple of pushes really, that was so cold and brutal,” said Rush.

Vink added that it was all about who had recovered best and who had the most in the tank today.

“It was only two hours today, if anything that is a bit short for us, but we recovered really well and rode within ourselves and rode with confidence and had a plan and it worked out.

“We went from the first climb, it was pretty much a time-trial from that first climb all the way to the finish over 40km.

“I have a few jerseys for racing over 40km in my closet so that is something that usually suits me well. I was pretty motivated to not be a ball and chain around Tim’s ankle anymore so that was great that we could ride as a team today.”

In the women’s race, Kate McIlroy and Amy Hollamby took a fourth stage win to extend their overall lead, while Holly and Michael Harris claimed another victory in the mixed category.

Constant rain and cool temperatures were the order of the day, which made the organisers decide to shorten the distance from 80km to 60km. 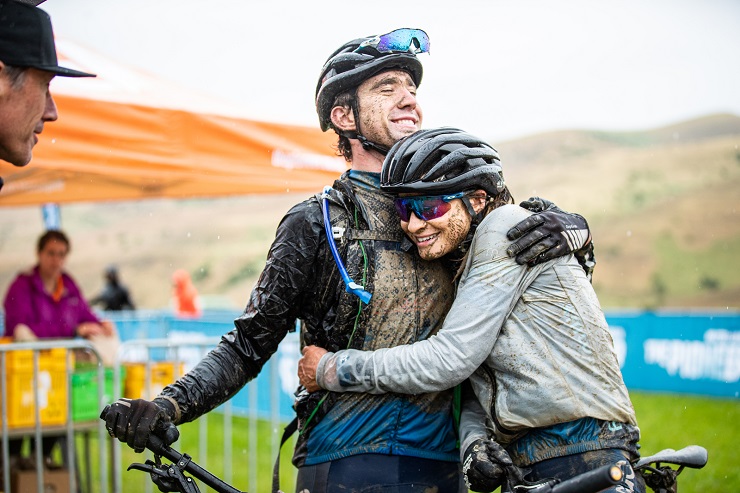 Brother and sister Michael and Holly Harris share an embrace after winning the mixed race on stage three of The Pioneer in Bannockburn, New Zealand, today. Photo: Tim Bardsley-Smith