For Thinus Redelinghuys making a new friend in the form of Kevin Benkenstein was even better than winning when the two arrived together at the finish of The Munga in Wellington on Friday night.

“I made a new friend and that’s better than winning,” said Redelinghuys, who recently tackled the 947 Ride Joburg on a mountain bike.

“After 1 000km of playing cat and mouse we realised we had both achieved our personal goals.

“For myself it was achieving a faster time than in 2018 and for Kevin it was that he could say he made all the right decisions at critical times.

“Going over the line first is always nice and I encourage good competition. But letting a three- to four-kilometre piece of steep rough road at the end decide who gets all the fame is pointless.” 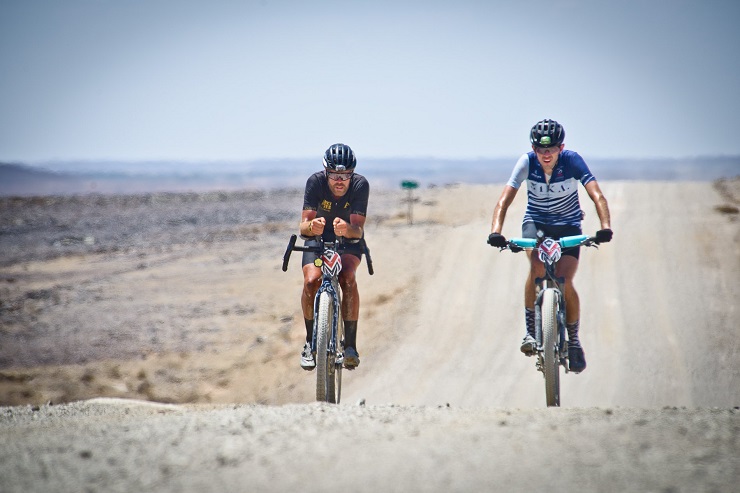 Kevin Benkenstein (left) and Thinus Redelinghuys arrived together at the finish of The Munga in Wellington on Friday night. Photo: Erik Vermeulen/The Munga 2019

Redelinghuys, who completed the gruelling race in two days, eight hours and 49 minutes, said he felt very pleased with his result.

“I started the race with no expectations regarding results. I just wanted to finish quicker than in 2018.”

Physically, he said he was drained afterwards due to the heat and the pace of the race.

“It’s so nice being on the smooth tar after Ceres and knowing that there’s only one pass between you and the finish line.

“This is truly a race that will take you through almost all emotions you can imagine in a few days. It’s a wonderful spiritual journey and there is no doubt that God has His hand in and over everything – and I experienced this first-hand.”

Redelinghuys said the first day (on Wednesday) was extreme and he had to stop at the first race village where he slept for about 60 minutes.

“My throat was so swollen due to the heat and wind I could literally not swallow any food, hence the decision to sleep and recover.

“I waited for a good friend and we continued riding to Britstown.”

After a solid breakfast in Britstown he said he decided to try and turn up the pace.

“Time is the only commodity you need to manage. I decided to limit my stops to five to 10 minutes per water point and 10 to 20 minutes per race village.”

He said day two was “also super hot” and he felt it was this that caught out most of the riders.

“The last day was a great day, but in typical Munga style for the last 60km we rode into a headwind that almost brought us to a stop coming into Ceres.

“It was quite mental to be so close to the finish and having to deal with a last weather curve ball.”

In total, Redelinghuys said he had roughly three hours of sleep.

“This year I had some monster visiting me when we cycled into Sutherland early morning.”

He added that this was a race were one needed to plan very carefully – but be open to change and ready to adapt immediately.

“The wind and heat play such a big roll. I never planned to sleep at the first village. This is a perfect example of how you need to adapt and make the best out of the situation.

“The main challenge for me was the heat. I made a point of ensuring I had enough water on me at all times to drink and cool down.

“The highlight was the stretch between water points nine and 10. Last year it was the toughest section and I felt like giving up. This year it was much easier and I made up the 30 minutes I slept by the time we got to the 10th water point.”