From a shaky start to the season to claiming the top spot on the podium, Joanna van de Winkel achieved a well-deserved comeback victory at the Berge & Dale in Krugersdorp today. 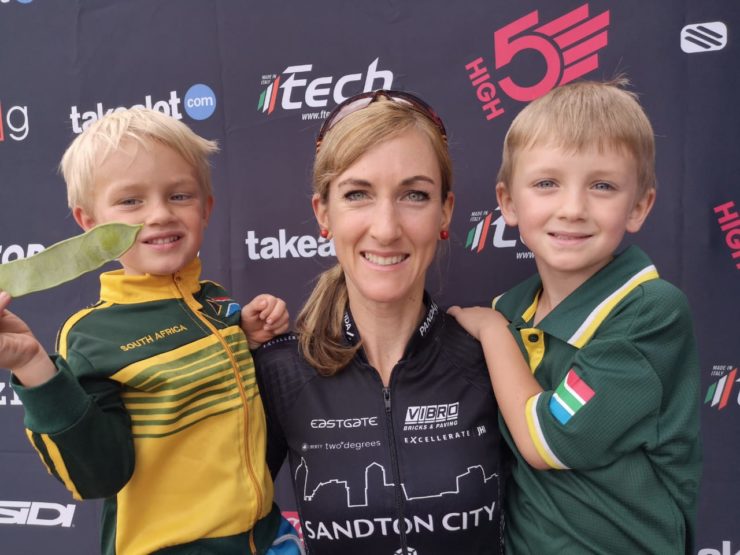 Joanna van de Winkel meets her kids at the finish line of the Berge & Dale where she placed first. Photo supplied

“It was very special to have my kids cheer me on at the finish, coming up solo to win,” Van de Winkel told In the Bunch.

“I was feeling a bit despondent about not getting results this first half of the year, so for me personally it meant a lot to win this race.”

The 37-year-old, who rides for Sandton City Cycle Nation, had a tough race with many of the riders constantly attacking along the 109km route.

“Cherise’s [Williet] team didn’t make it easy for me. They attacked a lot in the beginning. There was some very aggressive racing before the climbs and I had to cover all the moves.”

For this year’s edition of the Berge & Dale the route was changed so that the Hekpoort and Sterkfontein climbs were closer to the finish.

“On the Hekpoort climb Catherine [Colyn] and I were away and then we were caught just before the final Sterkfontein climb by another group of girls. They started attacking again before the climb so I was once again covering moves.

“Cherise attacked us before the Sterkfontein climb but I counterattacked and managed to get away to basically ride the last hill alone up to the finish.”

Van de Winkel said one of the toughest challenges of the race was riding with only one teammate to support her.

“The other teams were much bigger. One team attacked a lot. I think everyone knew I wanted to win so they made it very hard for me.

“I had to chase down almost every break. At one stage I didn’t even know if I would make it to the climb. I was just going in one attack after the next.

“It was also pouring with rain and very misty in the beginning. Sometimes we couldn’t even see where we were going and the trucks were splashing water all over us as we were riding.”

Completing the podium for the women’s race were Williet (second) and Colyn.

Regarding the route, Van de Winkel said she was happy with the change this year as it was better suited to a climber like herself.

“Not many races suit me as a climber in South Africa. A lot of the races we have are sprint races, so it was great that it had Hekpoort and the Sterkies climb in the last 20km of this race.

“I think my team is also very happy. I am glad to be able to give back to my team.”