Sarah Hill heads into the Big Five MTB Challenge in Wellington on Saturday with a mindset similar to what will be required for a key stage in next month’s Cape Epic. 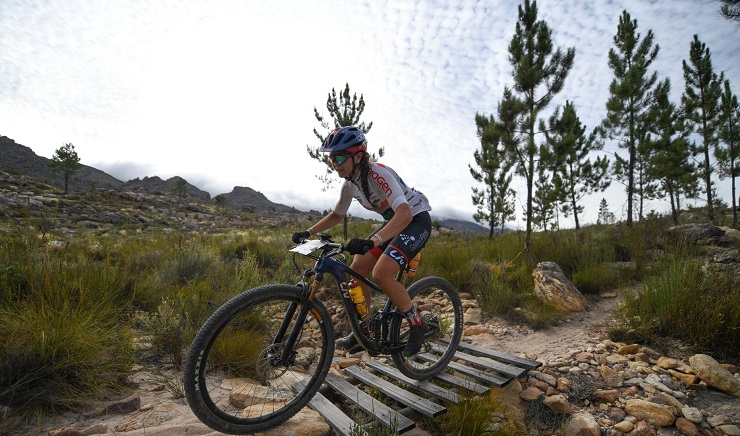 Sarah Hill will tackle the Big Five MTB Challenge for the first time in Wellington on Saturday. Photo: www.zcmc.co.za

The one-day race for solo riders is almost identical to stage five of the Epic.

But while the Epic stage covers 2 900m of climbing in 85km, the Big Five does 100m more ascent in 10km less distance.

“My goals and expectations are to survive; this day is huge,” said Hill.

“It’s not often that a South African course supports 3 000m of climbing in 75km, so this is insane as it is.

“I’d like to go out there and practise really important Epic tools, like pacing and fuelling myself correctly, not going too hard in the beginning and also, judging by the competition around me, how am I going to play it so that I can finish the strongest.

“I’m really looking forward to this race because it’s a very big component of the Epic. So it’s almost like a pre-run. How exciting is that?”

This event was launched last year, but this will be the first time Hill competes in it.

“There was so much hype about it. Watching the marketing and videos that came out post-event, we saw that Imbuko sponsors our brother team, the Imbuko Giant boys, so we thought why not bring the family together and have the Galileo Risk Infinity girls join. So it’s going to be a family affair.”

She said looking at the profile and having ridden a small bit of it when they did their Epic training camp, a lot of focus had been on how much climbing there was.

“It’s really enormous. The majority of races we do here are more like 1 600m over 75km, so this is almost double what we’re used to.

“But what everybody is not focusing on, and something that is definitely one of my strengths and approaches to this race, is how much downhill there’s going to be.

“If you’re climbing that much you obviously have to end in the same place that you started. With five major climbs, I’m really looking forward to five major descents.

“That’s where I can expect myself to recover, really enjoy the race for its technicality and its singletrack descents and then know that if I lose the girls perhaps on the uphills I can make up for it on the downhills.”

Hill said this event actually replaced one of the major races they do every year, the Knysna Bull, which is currently ongoing.

“It’s actually Theresa [Ralph]’s birthday today and every year we end up doing Knysna Bull as a present for her. She absolutely loves the Knysna forest. This year we changed it up a little bit. We thought how can we prepare better for Epic.

“This is a very important event leading up to Epic, not only from a ‘let’s check out the course before we race’ perspective, but also from a mental standpoint. Stages like these are really tough and I, as a growing athlete and as a 26-year-old, am constantly growing and working on my mental strength.

“My hormones rage when we do stage races and I just don’t know how to handle myself, so it’s all about learning more about who I am, how I can tolerate this kind of stress on my body and, going into Epic, understanding how my body is going to respond so I can be more prepared.

“We are definitely going to try and defend our African leader’s jersey at Epic. We can’t not, it’s too exciting. We’re coming back this year stronger than ever.”

An important race coming up after the Epic for her is the Swiss Epic, which is the team’s big goal.

“Also, of course, there’s the SA marathon champs and then the really nice one is world marathon champs. Last year was my first year competing. I went all the way over to Switzerland, racing with Robyn de Groot who came third and I came 26th after being seeded 56th. So that’s really good.

“This year’s it’s in Turkey. One of my biggest goals is to qualify and then go over and try and better my position. Also, I think there’s going to be 3 000m of climbing, so bring it on!”

The duo will then tackle Trans Baviaans, Race to the Sun, the Trailseeker Series, potentially the Cape Pioneer Trek and then their big finish will be Wines2Whales.

“We’re also doing the Dirty Kanza, which we got a wildcard entry for,” said Hill, referring to the ultra-endurance race held on gravel and dirt roads in the Kansas region of the United States.