It was a big day for OfficeGuru rider Travis Barrett as he claimed his first major classic victory at the Berge & Dale in Krugersdorp today. 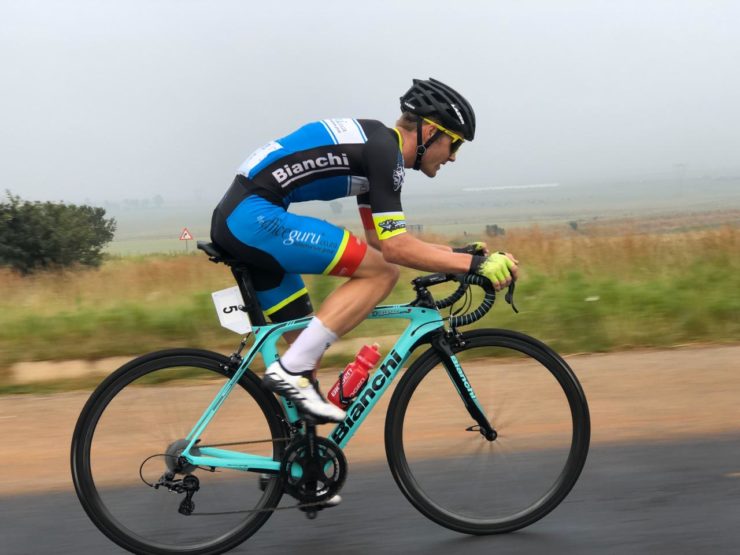 The 20-year-old finished third in last year’s edition and had high hopes that his team would top the podium at this year’s 109km event.

“This was my first big classic win, so personally it means a lot. It was also quite a big relief to finally get a win and it feels like a weight has been lifted off of my shoulders,” Barrett told In the Bunch.

“It was also an important win for OfficeGuru, with it being our first classic win for the year, hopefully the first of many.”

Barrett came in ahead of Flavio Venceslau and Orion Craigue, who completed the podium.

According to Barrett, their main plan going into the race was to have one of their riders in the early breakaway to have representation. From there the rest of the team would attempt to split the race up over the Hekpoort climb and head to the finish.

“I ended up getting into the breakaway for the day around 5km into the race, which was quite early, and for the first half of the race I was quite certain that we would be brought back.

“By the time we got over the Hekpoort climb we still had a time gap of over two minutes. That’s when I started to believe that it would be possible to take the win.

“Going up the final climb of the day there were only two of us left. I managed to time my sprint perfectly for the finish.”

Many riders were happy that this year’s edition of the event had a route change, with the Hekpoort and Sterkfontein climbs closer to the finish, and Barrett was no exception.

“I really enjoyed the route this year. The bigger climbs towards the end of the race made the dynamic of the racing different to that of the flatter classics.

“I think the end of the route suited me quite well, being more of a punchy rider than a pure sprinter.

“Thankfully my legs played along today.”