Brad Gouveris, who placed third in the Crit City Slam Zwift Classic at the weekend, believed the exposure was massive when achieving in a virtual race. 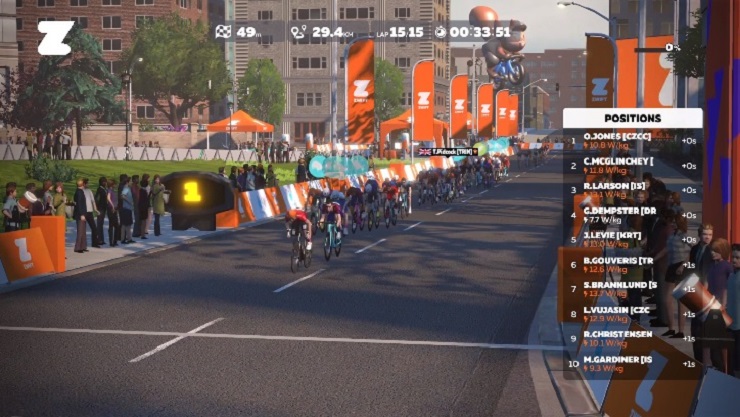 “It is definitely good exposure when you perform in a big race on a huge platform like Zwift,” said the 22-year-old from Port Elizabeth, who rides for the Turbo team.

“The exposure is massive, especially during these times,” he said, referring to the Covid-19 pandemic which has caused much of the cycling world to go into lockdown.

The criterium, which took place on Saturday, consisted of eight laps of the Downtown Dolphin circuit, totalling 29.4km. The United Kingdom’s Chris McGlinchey took the spoils in 33:51, followed by New Zealand’s Ollie Jones at 0.17 and Gouveris at 0.31.

For Gouveris, who was slated to ride for French team CR4C Roanne in Europe this season before fate intervened, it was fantastic to be on the podium.

“Obviously, being on the podium means you were close to first and it’s always disappointing to not win, but, regardless, I’m happy with my result.”

The puncheur, who won the South African criterium title in February, knew he had a good chance on a circuit that suited his strengths – with the pace also up his alley.

“I prefer it when it is flat-out from the start because then most people struggle to sprint.

“The high intensity definitely played into my hands and I knew I was in with a real good shot of winning,” said Gouveris, who has taken part in the Zwift Classics since 2019 when it was known as the KISS Super League.

The biggest challenges for Gouveris were trying to hold a good position in the bunch.

“The problem is that everyone else has this in mind too, so it becomes a real fight to move forward and that’s why the level becomes so high.

He said he found himself a bit far back heading into the sprint, which he felt perhaps cost him the win.

Overall, he was happy with his positioning throughout.

“My heart rate was very high, which isn’t great, but I managed to stay composed and trust in my abilities and not stress too much.

“In a Zwift race, you can be as strong as you want or as on-form as you can be, but your body is still going to go through absolute hell.

“It’s more about expecting the pain and simply dealing with it for as long as you can,” said Gouveris, who averaged 5.4 watts per kilogramme.

NEXT ARTICLE | CSA submits proposal to shape regulations during lockdown