Port Elizabeth mountain biker Edward Bennett spoke exclusively to In the Bunch about his terrifying encounter with a thug on the corner of Sardinia Bay Road and Victoria Drive on Thursday morning. 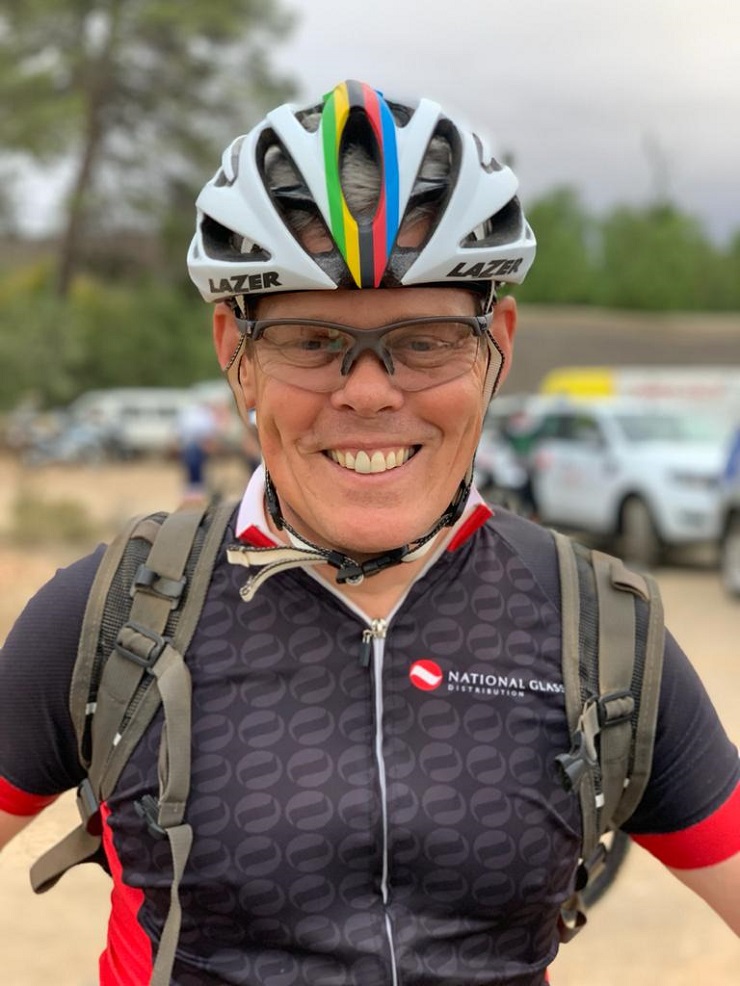 The 50-year-old, who has been cycling for more than 20 years, said he was hoping to stay anonymous, but the “wild stories flying across the web” and “gentle pressure from his friends” prompted him to share his account.

It is also not the first time that he nearly became a crime statistic.

“I had an initial encounter with thugs on the road some time ago. I saw them coming, turned and hightailed it before they could pounce.

“This time the thug and I tangled.”

Bennett left his house at 6am for his planned 28km loop, which included Victoria Drive, a notorious stretch for cycling related muggings.

“I decided to do the loop in reverse, traversing Victoria Drive after dawn. The back-up plan was to turn up Boundary Lane if I felt Vic Drive too risky.”

He wanted to get the full benefit of the hour, so decided to ride at tempo as he needed to be at work by 8am.

“I was having a good morning out, passing a number of joggers and cyclists on Sardinia Bay Road before the turn-off.

“I decided to do the 600m Vic Drive section as there were a number of people about and the sun was up with plenty of light to see.

“About a kilometre before the turn I overtook two well-known PE triathletes – Mariette Hattingh and Terry Thornton.”

He said he turned onto Victoria Drive and then it all happened very quickly and recalling all the detail required careful thinking.

“I saw a person approaching on my side of the road. He seemingly listened to music, walking along to the beat. Instinctively, I made the assumption that this person may want to do me harm.

“I focused on him, trying to read his body language and look for a possible ambush. I also checked for approaching cars from behind in case I needed space.

“I was moving at exactly 23.3km per hour, according to Strava. He seemed harmless and unarmed but when our eyes locked, I became weary.”

Bennett moved to the right of the yellow line and the suspect adjusted his approach accordingly, narrowing the space between them.

“I made a purposeful move towards the centre of the road, just to check if I was just being paranoid. The attacker followed suit and I knew trouble was upon me.

“There was not enough road to turn; that would’ve made me an easier target. And then I decided to do something illogical and try and surprise him.

“He was dead ahead and I sprinted towards him as hard as I could, hoping to gain a few seconds through surprise.”

He said the suspect froze and he veered to the right to try and get around him.

“He anticipated the move and followed the swerve. I pedalled straight into him hoping to knock him down.

“We collided, my wheel going between his legs, both of us somehow remaining upright.

“I grabbed him by the throat with my right hand and managed to uncleat on the right. Strange enough, my first thought being up close was ‘damn, how did he get those brand new i-Phone earpieces?’

“A wrestle match ensued with him trying to force me to the ground. He kept reaching towards his back, possibly to retrieve something from a pocket or waistband of his trousers.

“Each time he reached back, I tried to punch him with my left hand, forcing him to defend. The element of surprise worked for me it seems.”

Bennett said over the years a number of cyclists had suffered at the hands of thugs on this road and that the frustration of it going unpunished had unleashed his anger and given him strength.

“I actually had one of these guys, and I had him by the throat.”

The two triathletes he had passed a few minutes earlier approached and Bennett heard Thornton shouting, which startled the attacker.

“The thug took off. I was still holding on to a snapped off earpiece and his necklace.

“He was crashing straight through the Port Jacksons like a fleeing kudu and that was the last we saw of him.

“I am thankful to escape unscathed, with a big thank you to my fellow cyclists, Mariette and Terry, coming to my aid.”

In the past, Bennett said, if anybody had told him that a lone cyclist had been attacked on Victoria Drive, his reply would have been along the lines of: “What an idiot – don’t they ever learn”.

“My actions were my own – decisions made on the spur of the moment. If the situation was different, like if he was armed or had a buddy, my reaction might have been different.

“I felt I had a fair fight and chose to do so. I would really have liked to have gotten him though!

“It would have given me the world of pleasure knowing I put one of these cowards in prison.”