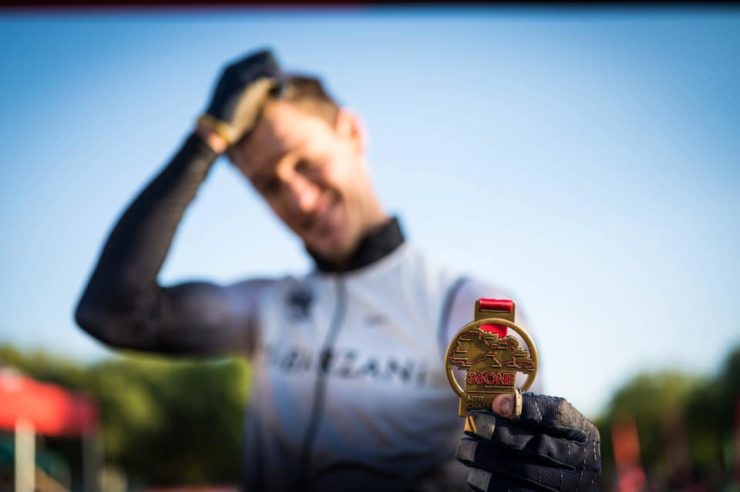 Dusty Day relied on a new nutrition plan to win the 36ONE MTB Challenge amid torrid weather conditions in Oudtshoorn on Saturday.

He completed the 361km course around the Klein Karoo just under 25 minutes ahead of Braam Wannenburg to make up for his second-place finish of last year.

“The weather conditions were hectic, with heat of up to 49 degrees and winds I have never seen except for those at the Cape Town Cycle Tour when it was cancelled,” the Barzani Pro Cycling rider said after the finish.

He credited a nutrition plan he adopted after the 2019 event for his successful ride.

“That, I feel, was the major difference between then and now,” said the 32-year-old from Klerksdorp, who possesses one of the most lethal sprints in South African cycling when he puts on his road racing hat.

Even though stomach issues – which saw him pull out of last month’s Munga Grit – crept into his mind, Day was able to manage the situation.

“I had that in the back of my mind ahead of the race, but I stuck to my training and my nutrition plan,” he said.

“I paced myself as I did during the Munga, but this time my body functioned better with the new nutrition plan.”

In terms of an overall strategy, Day said his focus was to build a lead and to try to maintain it.

“[Other than that] I didn’t have a specific plan going into the 36ONE because each race is different,” he said.

“Certain situations can arise and the elements are a big factor, so you can only plan to a certain extent. The rest comes with experience on the day.”

This year’s Ride for Sight champion said he just kept going “at a manageable pace” after cresting the first set of climbs 10km into the race.

“I don’t know why the others dropped off, but they weren’t there anymore.

“At checkpoint three, with 80km or so to go, I had a very large gap and decided to enjoy the last stretch to the finish.”

The winning time this year was 90 minutes slower than that posted by Dutch rider Ramses Bekkenk last year, which Day put down to the weather.

“That was 100 per cent due to the wind and the heat, which were really hectic this time. I must congratulate all the riders because the conditions were horrific.

“I’ve also had problems not finishing a race here and there. It’s not nice, but it’s part of the journey.

“Be proud and whack it next time!”