The 2021 Freedom Challenge: Race to Willowmore once again proved to be an unforgettable adventure and ended in a new race record. Photo: Supplied

The 2021 Freedom Challenge: Race to Willowmore once again proved to be an unforgettable adventure – and ended in a new race record.

Zimbabwe-born Mike Woolnough covered the 530km route from Cradock to Willowmore in the Eastern Cape in an astonishing 42 hours and 49 minutes, smashing the previous record set in 2020 by Henry Angove and Pieter van der Westhuizen of 57 hours and 53 minutes by over 15 hours.

Roger Nicholson finished in second place in 50 hours and 40 minutes, also well inside the previous mark.

Woolnough, now 61 years old, was grateful to the Freedom Challenge “family” for their sizeable assistance in his victory.

“The Freedom Challenge fraternity is a special family.

“After a muddy Race to Cradock (where he finished 13th), combined with a total lack of forethought on my part, I found myself at the start of Race to Willowmore with a bike that was sub-optimal.

“Without hesitation the Freedom Challenge family came to my rescue,” Woolnough said after crossing the finish line.

“I thought the problem I experience with my light at Race to Cradock was to do with the lamp.

“Colleen Cawood immediately offered me hers.

“Nicole Weir had a new spoke which was gratefully accepted and fitted to my wobbly rear wheel.

“Peter le Roux, a fellow Race to Willowmore competitor who I’d never met before, offered me his spare battery once I realised that my bike light issues were due to a faulty battery.

“Janine Stewart stripped bits off her bike after her Race to Cradock win so I could replace a broken bottle cage, fit a speed/distance gizmo and fit enough bike bags to avoid taking a backpack.

“Roger Nicholson supplied me with a new shifter cable, inner and outer after mine got sticky from the Road to Cradock mud.

“Best pit crew ever. Thanks you one and all,” an appreciate Woolnough concluded.

The Race to Willowmore is an equally physical and mental undertaking with riders needing not only to be adequately trained, equipped and prepared, but also proficient at navigation and bike maintenance.

Since the route is not marked, riders need to navigate by means of maps, compass and narrative directions with the use of GPS devices strictly prohibited.

The route follows the Freedom Trail from Cradock to Willowmore through the Karoo and Baviaans regions of South Africa along a wide variety of off-road terrain – dirt roads, farm roads and tracks, footpaths and animal tracks.

Many of the trails retrace old historic wagon routes which are no longer in regular use.

Apart from the riding, there are numerous portage sections where riders will have to hike, push and even carry their bikes.

Entrants have six days in which to complete the route. 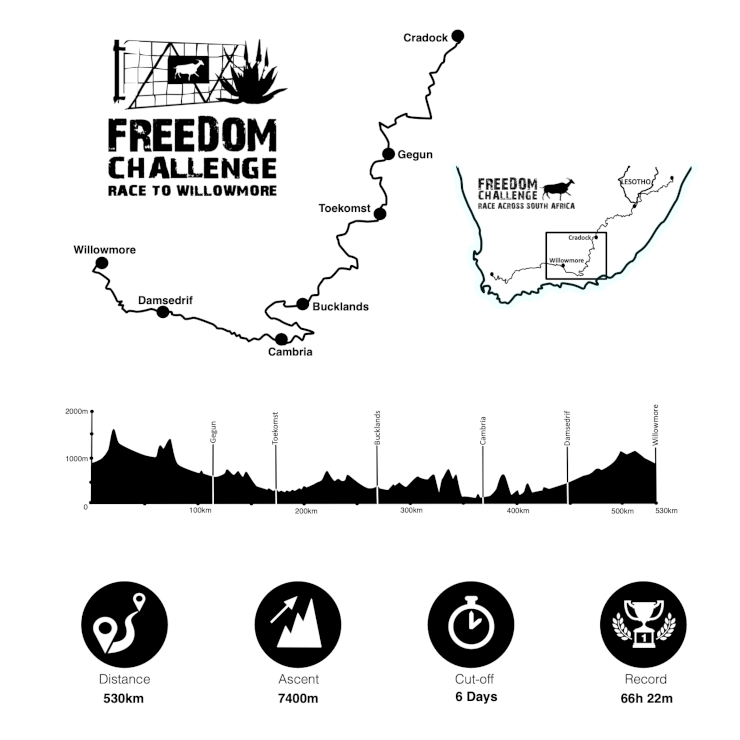 Become a subscriber to access this story and other benefits.