Young Christopher Philogene charged onto the elite downhill racing scene this season and is ready to take on the country’s best at the SA MTB Championships in Mankele, Mpumalanga, on Saturday.

The 18-year-old, who will be racing as an elite for the first time, said while he believed this year could be the one for him, he would not be putting himself under too much pressure. 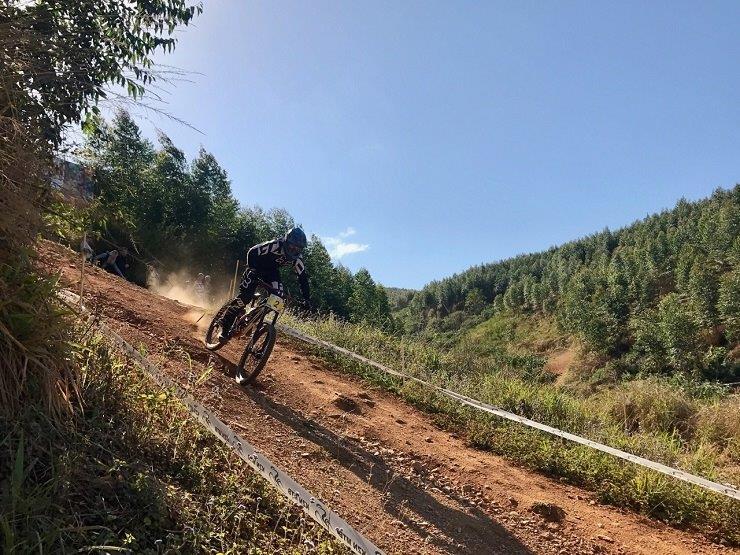 Christopher Philogene is ready to take on South Africa’s elites at the SA MTB Championships this weekend. Photo: Cycling SA

He admitted the prospect of facing up against the likes of Garlicki and Johann Potgieter, runner-up last year, was daunting.

“I’m pretty confident, especially in my ability, but some of the other guys are returning from overseas so it will be a full house, with a lot of them coming in pretty strong.

“That has knocked my confidence a little, but hopefully I still have the ability.”

Philogene said he’d been focusing on improving throughout the season, rather than only on the national title.

“I’ve been taking each race one by one this year, just trying to better myself each time.”

His results in this season’s SA National DHI Cup Series were evidence of improvement. He placed eighth in the opening round of the four-part series, following it up with a second and two firsts to win the overall title.

The youngster finished with a total of 720 points, with his brother Jonathan in second, almost 200 points behind.

No stranger to the track at Mankele, he said he’d aim to make the most of this familiarity to get him through safely and quickly.

“The track is going to be pretty rough, but it’s definitely one of the best we have in the country.”

The women’s race will see the return of Sabine Thies, who, as a sub-junior last year, posted the fastest overall time of the competition.

She is coming off a strong performance in the third round of the SA National MTB Cup Series, where she collected three titles last month.