Since officially joining Team Mad Mac p/b häzz in January, Declan Sidey has had a tumultuous year. But, with his injury woes now behind him, he has high hopes for the rest of the season.

Sidey, who nearly quit cycling after the Stellenbosch Cycle Tour in December last year, received a career lifeline by joining Mad Mac. However, he has displayed mixed results so far.

The 23-year-old won the overall PE Plett alongside Silverback’s Shaun-Nick Bester in March, with the same pair finishing third overall in the joBerg2c last month. 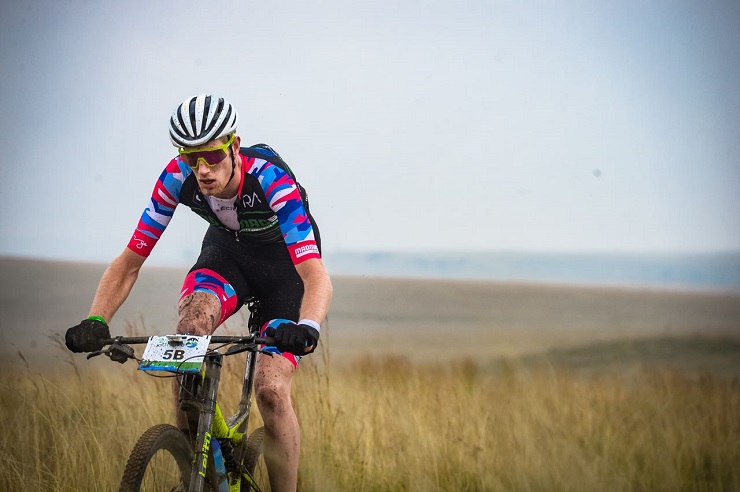 Since officially joining Team Mad Mac p/b häzz in January, Declan Sidey has had a tumultuous year, but he has high hopes for the rest of the season. Photo: Supplied

However, during the Cape Epic in late March, Sidey’s American teammate Brian Vaughn was forced to withdraw due to illness, which meant he had to finish the eight-day race alone.

Following a crash during a training ride, Sidey was then ruled out of the opening Trailseeker Series event in Buffelsdrift, as well as the sani2c Race in the last couple of weeks.

“It has been a tough, but also a pretty good season,” Sidey told In the Bunch today. “There have not been a lot of wins, but a lot of big races and some good results.

“I was happy to win PE Plett and a bit bleak to have finished the Epic alone, but it was good to do it for the first time and get some experience.

“Third in joBerg2c was decent, but not really the result we wanted. After my crash I cracked my elbow, fractured some ribs and got concussion.”

He said, however, the injuries enabled him to get some much-needed rest. “It allowed me to freshen up so that I can hopefully have a big second half to the season,” Sidey said.

“The Tour de Maurice [in Mauritius from September 5 to 10] and Cape Pioneer Trek [from October 14 to 20] are two big races that I will be targeting.

“The Berg and Bush three-day [Descent] and the rest of the Trailseeker events will most likely be my one-day race goals.”

Specialising in mountain-biking, Sidey said he was looking forward to racing on the road during the Tour de Maurice.

“We will have a crack at that with a full road team. I enjoy racing on the road as well and I am the only full-time mountain-biker on my team.

“It will be nice to link up with the guys and see how it goes in an international road tour.”

He had embraced the team set-up at Mad Mac since joining, Sidey said.

“It has gone really well and we have had quite a few sponsors come on board as the season has unfolded.

“That is a testament to how the team is growing and performing. I am happy with Mad Mac as the title sponsor. They have shown a lot of support and they are very eager for us to compete in big races.”

Sidey, who was close to starting a corporate career in chartered financial analysis when his cycling tenure was uncertain, has now prioritised the sport.

“My main job is racing,” he said. “I am studying and doing a bit of marketing and financial consulting here and there, but performances are my number one goal.

“The guys we are racing against are at a really high level, so it is important to focus as much energy as possible on training and racing.

“The other riders certainly are not holding back, such as Matthys [Beukes] and Gawie [Combrinck], who are flying at the moment.”