It was Hammond’s fourth title and it came despite him and Swanepoel taking a potentially devastating wrong turn that added about 3km to their journey.

Fortunately for them, other front-runners made the same mistake.

Hammond had warned before the event that this year’s edition might pose different challenges, with a few “young and fast” riders taking part. 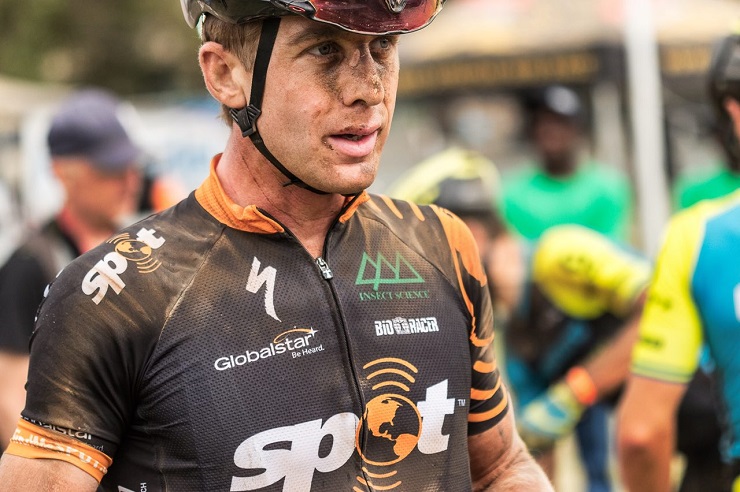 One notable pair in the line-up were in-form South African national marathon champion Gert Heyns and the versatile Arno du Toit, both riding for DSV.

“Winning definitely wasn’t something I was expecting considering the competition,” Hammond admitted to In the Bunch today.

“The resulting win wasn’t off the charts, but I realised it was going to be a big ask. I’m pretty stoked we pulled it off.”

Heyns and Du Toit were “very brave” on the start line and they pushed hard from the outset, Hammond said.

Assessing how the race unfolded, Hammond lauded Swanepoel for being tactically smart on the day.

“Ben was an incredible partner,” he said. “After Gert and Arno got away so early, Ben just kept things calm.

“If it wasn’t for that, for him remaining composed, I think I would have blown myself to pieces.

“We planned before the race to use the group as much as we could until the second checkpoint at about the 105km mark.”

Hammond added that after Heyns and Du Toit went ahead initially they planned to just sit back and “let them ride themselves to death”.

“It was a bit of a gamble, but to ride like that for close to 230km was an extremely big ask,” he said.

“We stuck to our plan of riding within ourselves. Then at about the 120km mark we actually caught up and we were probably riding within a minute of them [Heyns and Du Toit].

“It worked out quite well for us. I think it was good for us that they went hard off the front and burnt a few matches.”

Hammond, who is an ambassador for SPOT Africa, then stayed within 30 seconds to a minute of the DSV pair, having “chased the carrot” for over 70km.

A bit of luck went their way when a wrong-marked turn just after the 200km mark proved decisive as to the final outcome.

“We were happy staying in range and sharing the pace with them [Heyns and Du Toit],” he said.

“Then after the final checkpoint both they and we went wrong on the navigation from markers used in a previous race.

“I saw their tyre tracks on the ground so I knew they also took the wrong turn but at that point we didn’t know it was wrong.”

He then recalled going over the route guidelines the night before, which helped him realise they had taken the wrong turn.

“When we came to a corner gate or fence I was pretty sure from assessing the route that we weren’t supposed to go through a gate at that point.

“I was certain we needed to turn back and get back onto the gravel road. Gert and Arno must have ridden right through that gate; I don’t know where they ended up.”

Hammond and Swanepoel rode an extra 3km due to the wrong turn and he said he was worried they may have blown their chances as a result.

“We rode about 27km until the finish after getting back on track. We didn’t know we were leading at all. I really didn’t believe we were in front of Gert and Arno.

“I was already feeling quite down because we had already ridden an extra 3 to 4km. I thought we had thrown the race away.

“We only realised right at the end when we didn’t see Gert and Arno that we had won. It was a huge surprise.”

The third-placed team of Mike Posthumus and Derrin Smith reportedly also got lost in the same area before they eventually headed back and joined up with Heyns and Du Toit, in the end finishing just a second behind them.

Hammond and Swanepoel beat Heyns and Du Toit by just over six minutes.