Former national road champion Carla Oberholzer will adopt a new strategy when she lines up to defend her Berge & Dale title at Muldersdrift tomorrow.

“It’s basically a new race, which calls for a different and fresh approach from a strategy and team point of view,” said Oberholzer about the reversed route for the 108km feature race.

She added that it gave different riders an opportunity to win or shine on the day due to the climbing coming towards the end.

“With the old route if you were a sprinter and dropped off on the climb there was still quite a bit of time to get back if you managed to be in a nice group, whereas I think if you’re dropped now on Sterkfontein there’s not much time or terrain to get back if you’re not a good climber.” 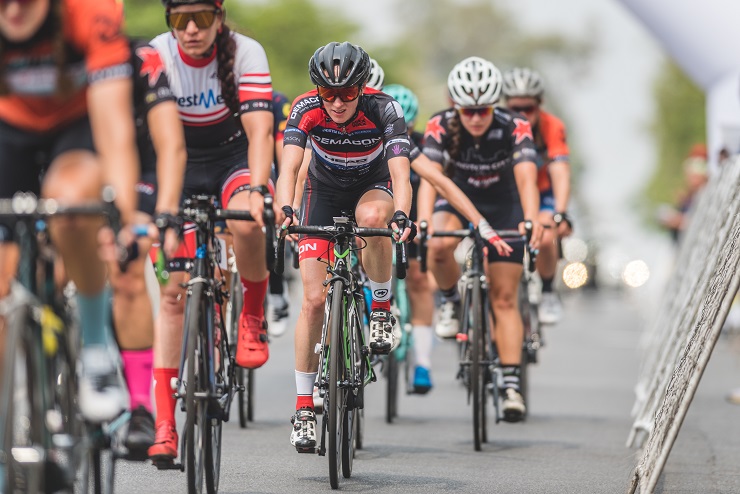 Oberholzer felt the new route was suited to different types of riders. “This is good for South African racing, which is predominantly flat and sprinter-type riding.”

This infamous Sterkfontein climb will feature prominently in the closing stages, with the finish at the top of the Krugersdorp hill before riders make their way down to Silverstar Casino.

“The Sterkfontein and Robert Broom climbs towards the finish will definitely play a role in who wins, but I don’t think you can leave all the racing just for the last climb.

“Well done to the organisers for changing it up a bit and switching it around. It’s going to be interesting and exciting.”

Oberholzer felt it was nice to ride on familiar roads, but with a bit of a twist. “It’s going to be a big change for everyone.”

The 32-year-old will race alongside Demacon teammates Heidi Dalton, Kim le Court and Azulde Britz, with the latter recently joining the team for the 2019 season.

“Lynette [Burger] is still 50/50 as to whether she will race or not after the big accident she had, so we’ll probably only know on the day how she’s feeling and if she’s racing or not,” said Oberholzer.

She added that she did not think they would be able to follow similar strategies to last year because of the reversed route.

“I think we’ll have to come up with a bit of a different race plan and just feel our way around the new course. I’m not 100% sure what each one’s role will be going into the race.

“We’ll have to have a good look at the course when we all sit together and then decide what our strategies are going to be.”

Oberholzer said she did not have the best start to the season due to a variety of factors, but the last two weeks had been going better.

“I’m feeling a bit more confident going into this weekend’s race. Like I’ve always said, as a team when we pitch up at a race, we race to win.

“Just because we haven’t managed to do that this year doesn’t mean our goal has changed. When we rock up on the start line on Saturday morning we’ll definitely be racing to defend the title as a team.”

She added that the national road championships earlier this month did not go according to plan at all.

“Obviously I was bitterly disappointed at the result. It’s not what I wanted for myself or the team, but at the end of the day that’s life and you can’t always have things go your way.

“What really matters is how you get back up from big disappointments like that. I’m looking forward to the rest of the year and believe we can pick ourselves up after the performance we had at SA champs.”

Oberholzer’s next goal for the year will be the African Continental Road Championships.

“If I’m not selected then my focus will shift completely towards the second half of the season, which will include defending my titles at the Amashova Durban Classic and 947 Cycle Challenge.”