South African professional cyclist Anriette Schoeman says she is excited about the future of the sport given the quality of the many young athletes coming through the ranks.

The 41-year-old, who represented her nation four times at the UCI Road World Championships, said when she started riding she did not have the opportunities youngsters have today.

“It’s awesome to see how the sport has grown. For example, schoolgirls can compete in their own age groups instead of with the elites or against the boys.

“I think it’s healthy and important for the growth of the sport that kids starting off should race against others their own age.”

The Mine2Mine road race champion added that people today were much more aware of cycling thanks to “brilliant” social media and world tour events being televised more often. 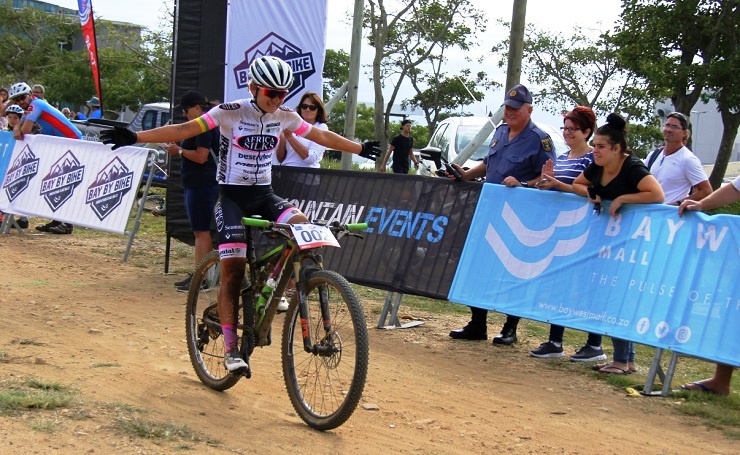 “There are also a lot of opportunities for younger riders who aspire to make a career out of cycling and race in Europe.”

“Not only is she incredibly versatile in all cycling disciplines, but her aggressive style of racing enforces respect in the peloton in a positive way and she isn’t scared to race hard and positively. She leaves it all out there in every event.

“I also think she’s a good ambassador for the sport and is very humble and easily approachable.”

She is also amazed at the level to which national road champ Ashleigh Moolman Pasio has risen.

“I have the biggest admiration for her in that she has taken the risk and based herself in Europe. It’s a hard life to get used to with lots of sacrifices, but she made it work and is now one of the 10 best riders in the world.

“I have a total appreciation for her results as I’ve raced there as well.”

What she has realised throughout her years of cycling is that at a young age one does not realise how much one relies on natural ability and good health to ride a bike.

“Now that I’m older I must say I appreciate my good health a lot more.

“Also [I’m] just realising how incredibly privileged I am to be able to do something I’m so passionate about and the fact that I was able to make a career out of it.”

She said she wished she knew her body as well back then as she does today. This included her limitations, she added, because you can only push yourself beyond your boundaries if you know what they are.

“When I started riding there were no power meters or scientific tools around to fine-tune training and I ended up overtraining quite often – but just because I loved the sport so much and didn’t know my body well enough.

“It’s not the be all and end all of training but it sure helps a lot.”

The Nanaga MTB Race and Bay by Bike winner has had to face various personal and career-based challenges and changes down the years.

“I think my biggest change as an athlete would be that in the earlier years I raced in a team format whereas I now race as an individual.

“Personally, I’ve been through a bit of a rough patch in the last 18 months as I’ve lost both parents. It’s sometimes very hard to stay focused and put on a brave face. But even though my training has not been very structured, just going for a ride is the best therapy at times.”

The East Cape Provincial Cycling Road champion said the loss of her parents had been tough and stressful and her biggest challenge was to remain healthy.

“I got sick a few times but I’ve been patient with my body and I’m listening more to it now than ever.”

Schoeman said she was determined to get back on track and work hard to pay back the brands that had supported her for so long and stood solidly by her through the hardest times of her life.

“I’d love to finish the year with a good result at the 947 Cycle Challenge, where I was runner-up last year.

“To podium at the big races is still a realistic goal and as long as I can stay relevant and inspire people and interest them in our wonderful sport that is my main objective for now.”

She would also love to share her experiences as an athlete to help young aspiring athletes realise their full potential and become the best version of themselves they could through the sport.

“Cycling has opened more doors for me than anything else I have ever engaged in and if you can find it in yourself to be 110% committed and disciplined then you should follow your passion and take the risk.