Winning his first Tshwane Classic title in Pretoria yesterday was a “massive boost” for David Maree as he had been struggling to recover from a couple of injuries.

“I had three weeks of minimal training after my crash at the Satellite Classic and surgery on my hand a week later,” he said.

“Every win is something you have to savour. They don’t come easy and there are 120 guys trying to win the race, so when you get your chance you have to make it count.” 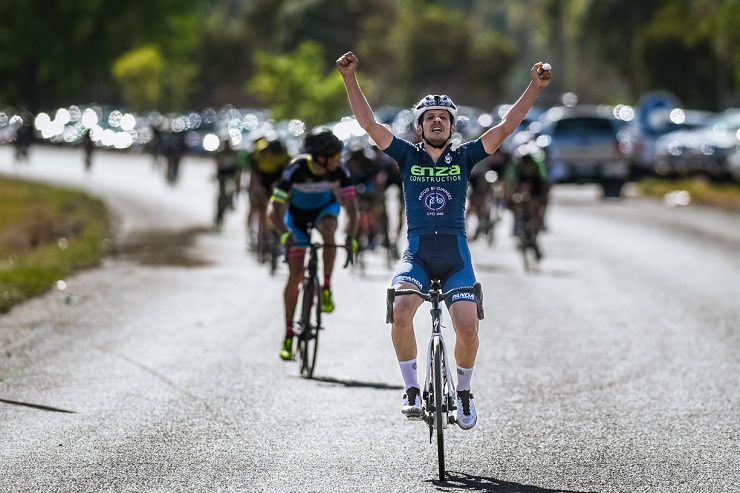 He said with the formidable Tom Jenkins climb on everyone’s mind there weren’t too many serious attacks early on.

“With the two stoppages, the racing was a bit negative at times but was quite fast through town,” said Maree, referring to the race being stopped for traffic safety reasons.

“I took a back seat in the racing a bit today as I believed it might be too dangerous to continue.

“With about 3 to 4km to go I rode up to the front and hung around there. We rounded the corner with 2km to go and that’s when I knew this race was now going to be a bunch sprint.

“Dylan [Girdlestone] had other ideas and launched that big attack with 1.4km to go and pretty much set me up perfectly to take the win.”

Maree said the race was not full road closure and they had numerous traffic issues.

“Our race was stopped twice due to the lack of safety. We also never went over Tom Jenkins after we were taken the wrong way.

“This did help me as they removed a big climb and as we turned the last corner with 2km to go I suddenly realised that they must have made a mistake and the finish was only a few kilometres away.

“The finish suited me to a T. I create some decent power in the sprints with my weight and on a finish like that I will always favour my own chances from a break or a bunch sprint.”

“He did get the short end of the stick in that we didn’t go over Tom Jenkins and I believe he would have done some big damage if we did.

“Nevertheless he put in a massive attack in the end to hold off the bunch. I know his power and when he attacked I knew immediately that he had the power to go all the way and I had to stick with him if I wanted to win.”

Maree, who was recently appointed as a rider representative at Cycling SA, said safety was a huge issue in all races.

“I have made it a focus point for me to try and get safer racing conditions for us as racers.

“The win would be my best part and the fact we didn’t go over Tom Jenkins would have been quite painful. But there were so many downs in this race it’s hard for me to focus on the good.”

Maree said he still had quite a bit of racing coming up.

“This coming weekend I take a trip to Cape Town to watch some Rally Cross, but after that it’s another three weekends of racing with 947, Double Century and the weekend of JHB Grand Prix and omnium champs.

“I’m really looking forward to the Grand Prix and omnium and if you are in town, bring a braai and come watch some great racing at Hector Norris Park.”

Regarding next year, he said they were still in a tight spot with sponsors to make the team work.

“But Rowan from ENZA has confirmed we will be continuing with the sponsorship, but we are in need of some co-sponsors to keep us going.”