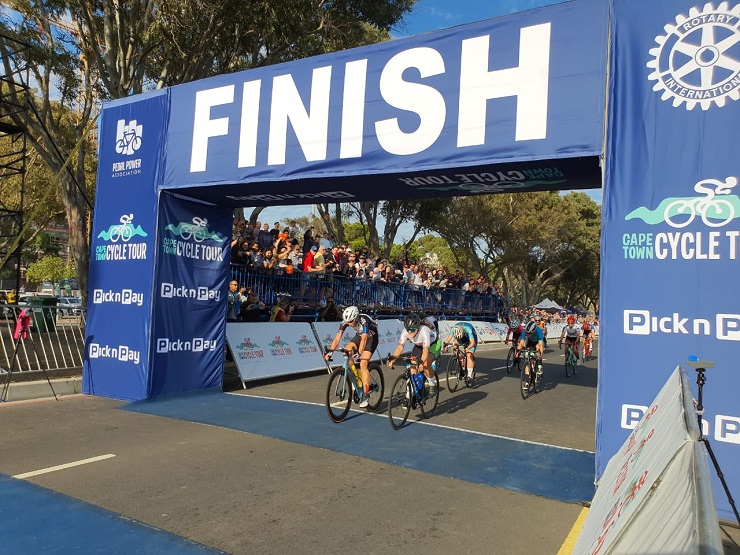 “It feels amazing. I’ve come into this race the most unknown I’ve ever gone into a race. It’s been quite an interesting week, I had a bit of a stomach bug,” said Willeit.

“It was a very surgy race, lots of attacks, very very intense. It was very tactical and a super long finish. There was a straight on headwind. I think I kicked like five times in the last 500m. My legs were cramping at the end. Like every Cycle Tour, it was a very special one.”

“From the start it was hard. The mountain bikers Candice Lill and Ariane Luthi made it really hard. I tried to save my energy a bit,” said Janse van Rensburg.

“When we got to Chapman’s Peak I think I was in the second group when we went over and I chased back to the front. On Suikerbossie I dropped again a bit and I just kept my pace and made my way up to them again.

“Coming into the finish it was absolute chaos. There were attacks from like 5km out. I think I misjudged the finish a bit and I kicked early, but I’m super happy. I couldn’t ask for more. I gave it my best shot.”

Earlier, Cathryn Colyn and Kelsey van Schoor went off the front as the race went through Misty Cliffs.

They were joined by Yolandi du Toit, who went solo briefly before a group of three assembled at the front consisting of her, Colyn and the United Kingdom’s former world duathlon champion Emma Pallant.

The latter attacked her breakaway companions on Little Chappies to surge ahead on her own while Parys Edwards – the 43-year-old who won the Tour of Good Hope by a single second on Friday – gave chase from behind as they headed into the Chapman’s Peak ascent.

Pallant was the first to crest the penultimate climb and she settled into time-trial mode as she head for Hout Bay and the start of the final obstacle of the day – the sharp Suikerbossie climb.

Back in the bunch, Lill was seen driving the pace from time to time in an attemp to keep the Brit’s advantage in check.

On Suikerbossie, Pallant was chased by a group of 12 which included all of the pre-race favourites. As they caught the erstwhile leader, Lill went on the attack but she was closely marked by several riders – including Willeit.

Leading the way over the top were Vera Adrian (Namibia), Janse van Rensburg, Kim le Court, Lill, Taylor, Pallant and Edwards. But several riders joined them on the way down into Camps Bay.