A strong performance by Wessel Botha saw him cap his first year as an U23 with victory at the 947 Mountain Bike Challenge in Johannesburg today.

The 18-year-old, who celebrates his birthday next week, said the 55km event had been a goal from the start of the season after he finished fifth last year.

Botha added a number of top results to his list of achievements this year. He won the 50km Emperors Palace MTB Classic in April before he narrowly lost to Phillimon Sebona at the Magalies Monster two months later. 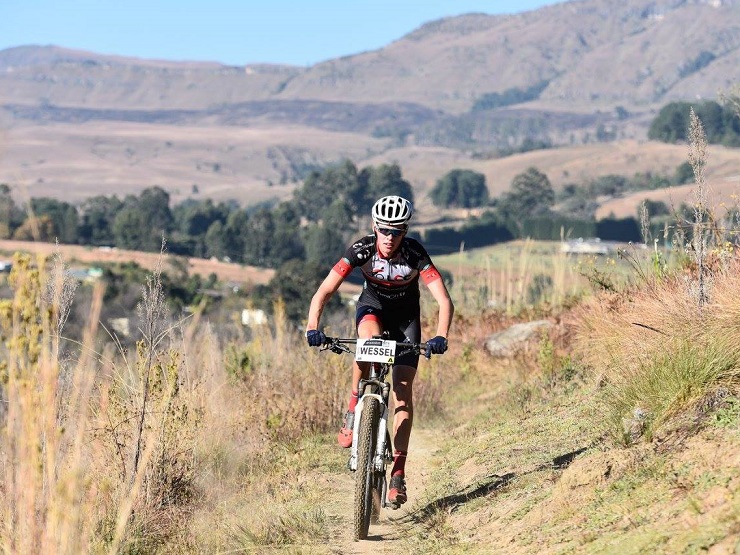 Most recently, the Pretoria resident finished fourth overall at the Berg and Bush ‘Descent’ as well as in the Gauteng TrailSeeker Series.

“It’s been a great first season as an U23 and this race was definitely a big goal of mine, so to win it was really special,” said Botha, who rides for Lynwood Cyclery.

The youngster beat defending champion Jan Withaar and Pieter du Toit after he pushed through weary, end of season legs to finish in 1:55:40.

Botha explain the race started at a frantic pace but unexpected winds meant riders raced with their heads as much as their hearts.

“There was quite a bit of wind so it was a bit tactical, nobody wanted to go hard all the time because otherwise you’d be wasting your efforts.”

The first section of single track, roughly 6km in, whittled the leading riders down to a group of five – Botha, Withaar, Du Toit, William Mokgopo and Phillimon Sebona.

The group worked together until the first water point, where Botha decided to up the pace, dropping Mokgopo and Sebona in the process.

The three continued to work together through the technical single track but, drawing on his knowledge from last year, Botha knew he could not wait too late to make his move.

“I knew to leave my move to the last minute was a bit risky, so I knew the second last climb was the one to go on.”

With 4km left to go, Botha put the hammer down on the penultimate climb. A tiring Du Toit soon fell off the pace and Withaar quickly flagged too.

“When I saw him (Withaar) struggling I went as hard as possible and luckily he wasn’t able to keep up. I kept my head down and gave it my all until the finish.”

Botha, who will possibly line up for the road race next weekend, said his success this weekend provided great motivation going into the off-season.

“It all went according to plan today and I’m very happy to have taken the win. It gives me even more motivation to work hard during the off-season now for next year.”

Samantha Sanders rode away from the women’s field and claimed victory in her category, followed by Theresa Ralph and Natalie Strydom.

Sanders will end her season with next weekend’s road race.