Robert Hobson, who won the Sanlam MTB Invitational outside Paarl last Saturday, has caused a stir in his first year of competitive mountain bike racing.

Hobson, 19, and his teammate Rossouw Bekker took their opponents by surprise when they won the event at the well-known wine estate. After taking a month-long break from cycling a while ago, Hobson did not know what to expect when they lined up. 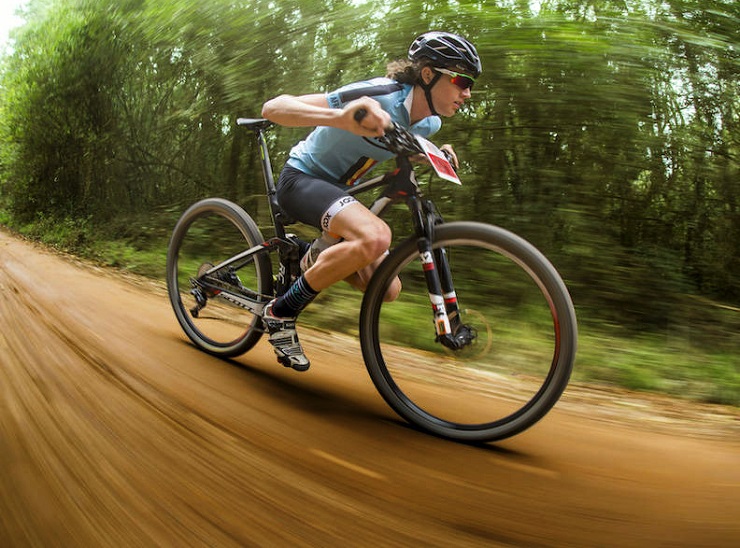 Robert Hobson on a downhill descent at the Karoo to Coast. Photo: Supplied

“I took time off for exams, but even before that I felt my form had taken a slight dip,” the Flandria Cycles rider said.

“Now I feel I’m starting to pick up again. I’m feeling more comfortable on the bike.”

The Stellenbosch resident has punched above his weight throughout the year.

“I really enjoy stage racing. It’s something I want to get into,” said Hobson, who also wore the king of the mountains jersey during the Cape Duo Challenge.

“One of my main strengths is riding in marathon races with a lot of climbing and I want to gain as much experience as possible during my studies.”

His highlight this season was winning the Ride2Nowhere alongside Erik Kleinhans in September.

“When I began cycling, the first pro I heard of was Erik. And then he approached me, asking me to join him for the event.

“It was really awesome. Someone I had looked up to inviting me. And then winning all three stages and the overall title. That was the cherry on top.

“I learnt a lot from him in that race and in a way it enabled me to win the Karoo to Coast two weeks later, which was very special.”

Hobson said one of his tougher experiences was the transition from riding in half-marathons while he was in matric to his first full marathon in the Nissan TrailSeeker Series race, in which he finished seventh in April.

“That race hit me hard. Not only was it double the distance, but the temperature went up to about 35 or 40 degrees Celsius in Tulbagh that day.

“I really had to dig deep, but the race was really mind-strengthening. It forced me to adapt quickly to ensure I could compete for the rest of the year.”

Hobson used to cycle mostly recreationally when he was at Paul Roos Gymnasium.

“It wasn’t an official sport at the school and I took hockey more seriously. Only in grade 12 (last year) did I think I could begin winning races.”

He now wishes he could have taken the Spur Schools MTB League more seriously because of the benefits it offered but cycling has already provided valuable opportunities.

“I honestly don’t know what I would do without cycling.

“It’s so freeing and such an awesome way to explore. A bike can take you to places that you can’t go to on foot or by car.

“It has already opened many doors for me and I’m really enjoying it.”