NAD Pro’s Matt Beers says he will be hoping to make a strong statement at the Cape Epic when it starts with the Prologue at the University of Cape Town on Sunday.

Beers, who only joined NAD Pro towards the end of last year, will be partnering Nico Bell for the eight-stage race.

Beers and Bell rode together for the first time at the gruelling three-day Tankwa Trek, where they managed to finish fourth overall. 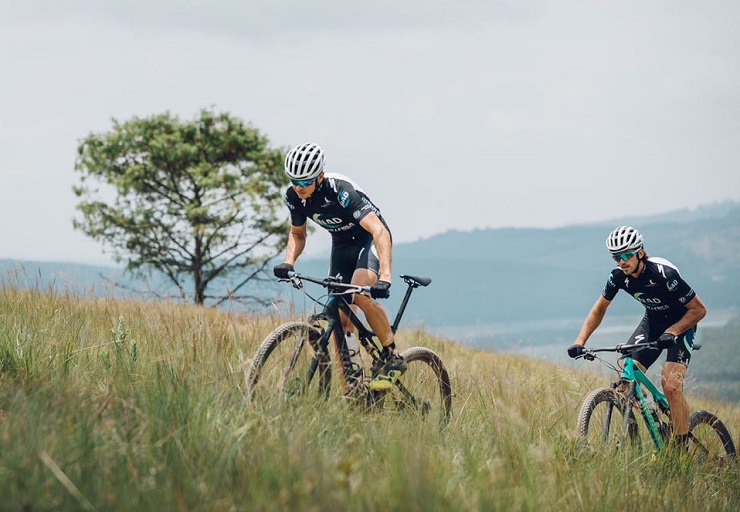 Matt Beers (right) and Nico Bell will be hoping to make a strong statement at the Cape Epic. Photo: Supplied

In a congested international field their main goal was to claim the African jersey, Beers said.

“Our main goal is the African jersey, which will almost guarantee us a top-10 spot, another of our goals,” Beers told In the Bunch.

Beers is expecting a tougher challenge than in previous years.

“Every year it gets harder. The level is so high now. I think the Tankwa Trek gave us a good indication of where we are,” he said.

“All the big names were there except for Nino [Schurter] and [Matthias] Stirnemann.

“I think we have a good shot of running it up against the big guys.”

For the African jersey, Beers is also targeting a few local teams. “Philip [Buys] and Matthys [Beukes] will be our biggest rivals,” he said.

“They have won it many times before and they are always hungry for it.

“Tim Hammond and Arno du Toit will also be strong, as will HB Kruger and Stuart Marais.

“There may also be some other dark-horse teams – such as Dylan Rebello and Marco Joubert – who could bite at your heels if you are not careful.”

Beers said his and Bell’s strengths were “almost identical”, hinting that they would complement each other well throughout the race.

“He [Bell] is a very powerful rider on the flats and he climbs very well; I have the same abilities.

“He is also very experienced, calm and quiet and he is a pleasure to ride with. I think we will make a really good combination.”

“This year has probably been the best year for us [NAD Pro],” Beers said. “Everything has gone according to plan and we have hit all of our marks.

“We also had a good training camp in Crystal Springs recently. We are all feeling good and our power is there.

“I think Tankwa went really well considering it was the first time we raced together; we just got stronger on each stage.

“We are where we want to be and I am very excited for this one [Cape Epic]. I am confident it will be good.”

NEXT ARTICLE | In the Bunch show – Gaze’s cup runneth over