HB Kruger and Matt Beers won the second stage of the Liberty Winelands Encounter mountain-bike race in the Cape Winelands today in a sprint finish in Franschhoek.

In a 48km loop which started near Le Franschhoek Hotel, the ASG-NAD pair took the honours three seconds ahead of overnight leaders Gert Heyns and Arno du Toit (DSV-Pro Cycling).

Kruger and Beers crossed the line in 1:42:09, with the Imbuko-Momsen team of Dylan Rebello and Marco Joubert filling third spot on the podium.

Heyns and Du Toit still lead the general classification in 3:34:28, just under two minutes ahead of Kruger and Beers, with Rebello and Joubert third.

Kruger, who won the Winelands with Waylon Woolcock last year, said it was a quick and aggressive stage.

“After a neutral zone, we turned up Matoppie Hill, where Matt and myself, along with Gert and Arno, managed to get away,” he said.

“I did drop off slightly at one stage, but we managed to get back to Gert and Arno at the top.” 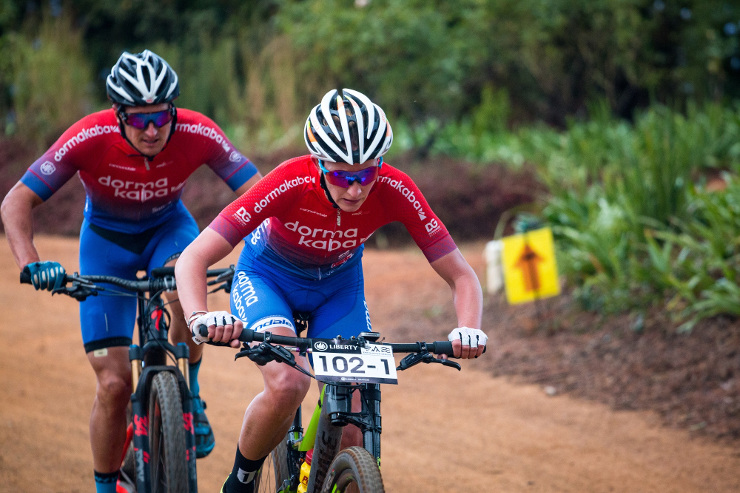 Dormakaba’s Carmen Buchacher (front) and Paris Basson, pictured here during the 48km second stage of the Liberty Winelands Encounter mountain-bike race in Franschhoek in the Cape Winelands, placed second on the day in the mixed category. They also moved into second place overall. Picture: Robert Ward

Describing it as a “flattish, rough course”, Kruger said it was difficult to make a move to create a gap.

“We raced together, not pushing too hard, but making sure we were checking each other out.

“Coming into the finish we saw an opportunity to go for a stage win and we came sprinting out of the last single-track.”

Still trailing by around two minutes, Kruger said it would not be easy but they were focused on making up the leeway on tomorrow’s final stage.

“The stages are relatively short so it’s really difficult to create a big gap,” he said.

“But tomorrow has some testing areas, too, so we will definitely not just give it to them.”

They finished ahead of Carmen Buchacher and Paris Basson, with Everett and Anna Haywood third.

The stage winners consolidated their lead with an overall time of 4:02:50, more than half an hour ahead of Buchacher and Basson.

Louise Ferreira and Marleen Lourens continued to dominate the women’s category, winning the stage in 2:13:36 and taking a big lead in the overall standings.

Presented by STANLIB, the final stage tomorrow will see the cyclists tackle a 50km route from Le Franschhoek Hotel to Nederburg Wine Estate near Paarl.